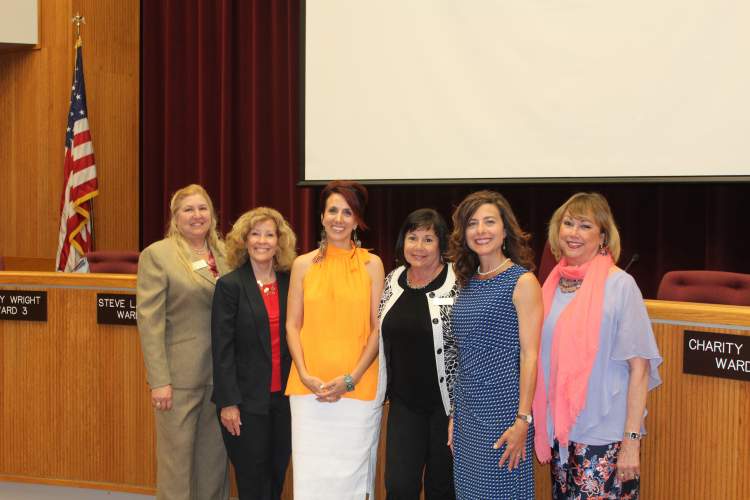 RAPID CITY--March is Women's History Month and today is International Women's Day. It's an opportunity to reflect on the important contributions women have made in Rapid City local government throughout Rapid City's history.

A review of City Hall archives provides a revealing look at how women have made their mark at City Hall.

Currently, there are five women serving on the Rapid City Council: Lisa Modrick and Becky Drury in Ward One, Amanda Scott in Ward Four and Darla Drew and Laura Armstrong in Ward Five.  The June 2017 election of Drury and Armstrong to the Council was historic, producing the first-ever Rapid City Council comprised of an equal number of women and men.   It also marked the first time in City history with more than one ward served by two women.

In addition to the current even-split of women and men on the Council dais, the Council's major committees are chaired by women, with Drew serving as chair of the Public Works Committee and Armstrong chairing the Legal and Finance Committee.

**During the 2016-17 term, the Council was comprised of four members with Doyle, Drew, Modrick and Scott, who served as the Council's vice president.  It was the third time four of the 10 Council members were women. The first was in 1990 with Delores Coffing, Vivian Pappel, Carole Hillard and Karen Bulman serving; and 1991 when the Council included Bulman, Coffing, Hillard and appointee Twyla Rabe.  Bulman, Hillard and Coffing served multiple terms on the Council.

Bulman continues to serve on the City's Zoning Board of Adjustment/Planning Commission.  Hillard, who died in 2007, served in the state legislature and is the only woman to have served as South Dakota's lieutenant governor (1995-2003).  Coffing also served 12 years on the County Commission.

"The entire city needs to appreciate all the women over the years who have worked for the City, who have run for city council, who have volunteered on our city boards and committees," Scott said in an interview last year.   "They have helped develop the path where people with diverse opinions and perspectives have the opportunity to serve their community, no matter their gender, age and so forth."

**Paging through City Hall archives reveals the first woman to run for local office was Caroline E. Feigel, who came to Rapid City in 1886 as a member of pioneer Frederick Feigel's family.  The Feigel house is one of Rapid City's oldest structures, located at 328 E. New York Street, and was built in the 1880s overlooking Rapid Creek and Roosevelt Park.

Caroline Feigel was among three members of the first graduating class at South Dakota School of Mines in 1890 and played an active role in the growth and development of Rapid City, including the donation of several acres of land for what is now Roosevelt Park.  Feigel finished fourth among six candidates for city commissioner in April 1927, nine years after women obtained the right to vote.

**Other women in the first half of the 20th century who ran for local office included Frieda Radusch in 1947, Marcia Scanlon in 1948 and Viola Dusek in 1951.

**The first woman to be elected to the City Commission was Florence Krieger in 1955. Krieger was a teacher in the Rapid City school system and served as president of the Retired Teacher Association from 1966-70. She passed away in 1990.

**Opal M. Burton was the second to serve on the local Council, elected in 1961 and re-elected in 1963.  Burton grew up near Faith and worked with the Army Corps of Engineers when Ellsworth Air Force Base was being built.   She was a member of several local civic organizations and died in 2014 at age 94 in Story, Wyoming.

**The third woman elected to Rapid City local government office was Delores 'De De' Ghere.  She was elected in 1969, lost in 1971 and was elected again in April 1972, just weeks before the June 9, 1972 flood. Ghere, who passed away in 2017, was also the first woman to serve on the County Commission.  She and her husband Warner operated Ghere Construction and she holds the unique distinction of serving on the Council, Commission and the Pennington County School board.

**The year 1972 marked the first time two women served on the local Council at the same time as Ghere and Bernita Loucks were elected. Loucks would be re-elected in 1974 and 1976 and she ran for mayor in 1979, finishing second in a three-way race won by Art LaCroix.  Loucks served 26 years on the South Dakota Water Management Board (1986-2012) and currently lives in Rapid City.

Darline Gerlach won a term on the Council in 1975 and Norma Thomsen was elected in 1976 and re-elected four times, serving until 1986.

Numerous women would run and be elected to local government offices from the 1980's to the present time.

**Scott and former Council member Jerry Wright also point to the contributions of women who served as effective '11th members' of the Council.   Wright said women such as Grace Mickelson and Mildred 'Ma' Brown consistently attended Council and Committee meetings and were outspoken with their opinions, perspectives and insights on community issues with mayors and council members.

These women and their good works helped pave the way for today's leaders in local government. On the occasion of International Women's Day and during Women's History Month, City officials salute and honor all these women for their service and impact on the Rapid City community and its citizens.