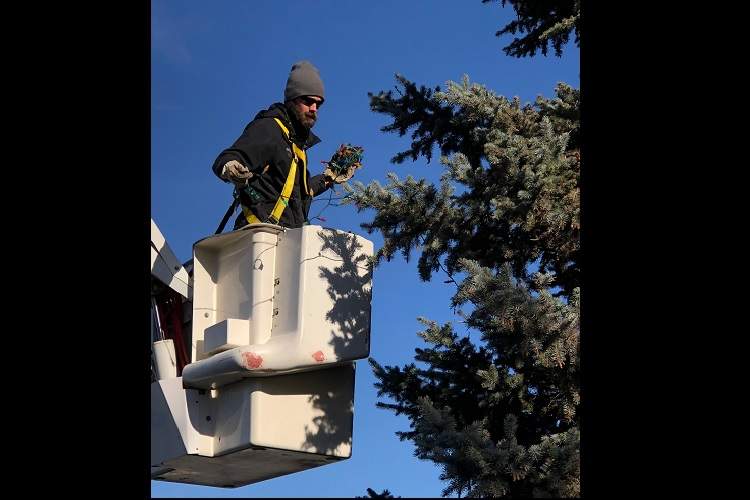 FOR THE HOLIDAY SEASON

City Parks Division crews are spending most of the next two weeks decorating Halley Park, Wilson Park and the expanded downtown core area with numerous lights and decorations.

Parks Division Manager Scott Anderson says crews started installing decorations in Halley Park and in the downtown area earlier today (Monday).  Crews will put up some of the decorations after Thursday’s Veterans Day observance, exchanging veterans banners with the holiday decorations.  Lighting and decoration work will also be done in Wilson Park and Halley Park.

"We want to take advantage of the relatively nice weather as we approach Veterans Day to begin decorating for the holidays,” said Anderson. “We want everything looking nice and ready in time for the community holiday celebrations at Wilson Park and downtown."

The annual Wilson Park Tree-Lighting Ceremony is scheduled for 5:30 p.m. Tuesday, November 23 and the annual Festival of Lights parade and activities are scheduled downtown on Saturday, November 27. This year's parade begins at 6 p.m.

As part of a multi-year project, the City Parks Division is continuing to replace old decorations with new ones. Started a few years ago, the last phase of new decorations will be ordered in 2022 for the poinsettia street lines on Kansas City Street and new light strings for Halley Park.

“The plan for 2023 will be to add whatever we can to Halley Park to make it shine brighter,” said Anderson, joking they may have to rename the park ‘Griswold Park’ in reference to the lighting effect in the ‘Christmas Vacation’ movie.

Most of the lights and decorations will remain up past New Year's Day with the downtown tree decorations remaining up through the Black Hills Stock Show.