Retired Navy Submariner is September's Veteran of the Month 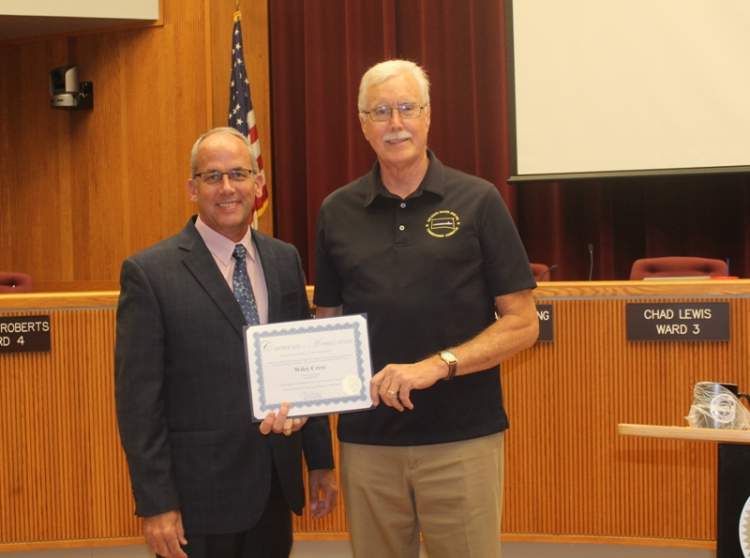 RAPID CITY--Following in the footsteps of family members, there was never a question in Wiley Cress' mind if he would enlist in the US Armed Forces.

The question was when.

His father and two uncles served in World War II and with the recruitment efforts of one of those uncles, Cress joined the Navy in 1964.  His military service career would span 32 years and he would earn 13 promotions and numerous campaign, service and unit awards, medals and citations.

Cress is Rapid City's Veteran of the Month for September.  The honor is presented by the City of Rapid City in partnership with the Veterans Coordination Commission.   Cress was recognized at Monday night's City Council meeting (Sept. 18).

Retiring in 1996 at the rank of O-5 Commander, Cress was qualified in submarines and served as the commanding officer of an offshore communications station.  He was awarded three Navy and Marine Corps Achievement Medals, four Navy and Marine Corps Commendation Medals, and the Meritorious Service Medal.  He is authorized to wear the Submarine Warfare Insignia, Polaris Patrol Pin with four gold stars and the Command Ashore Pin.

Since retiring from active service, Cress currently works with children in the Rapid City Area School District's Special Education Department.   He is also a life member of the Veterans of Foreign Wars (VFW) and has served as past commander of the local United States Submarine Veterans (USSV) group.  He also coordinates the USSV's outreach program, 'Kap(SS)-4-Kid(SS)', which helps children with serious medical conditions to be honorary submariners.  He is also a member of the South Dakota Commissioning Committee for the USS South Dakota and is working to facilitate support in the christening and commissioning of one of the newest, most innovative fast-attack submarines in the US Navy currently under construction in Groton, CT.