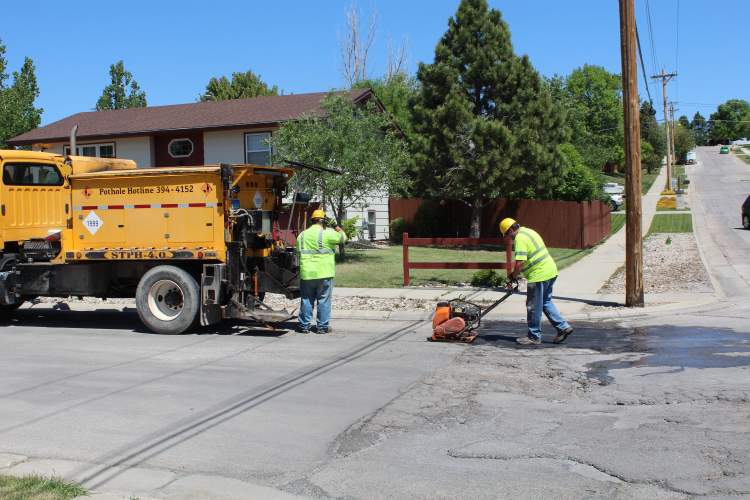 RAPID CITY, S.D. – Domino’s promised to save carryout pizza, one pothole at a time, and it is doing just that in Rapid City. Thanks to an overwhelming number of nominations from its residents, Rapid City was selected as a “Paving for Pizza” grant recipient.

"We will put the grant award to good use," said City Communications Coordinator Darrell Shoemaker.  "The City fills conservatively more than 5,000 potholes annually with the wear and tear on City roads from heavy traffic and our ever-changing weather conditions and freeze-thaw cycles.

"This grant award will allow us another tool to fill and repair more potholes."

The grant award is for $5,000 and the City agreed to estimate how many potholes it could repair with the grant and provide a time frame for completion.  Since the area is in its winter season, the City will utilize the grant award to fill or repair 400 potholes next spring with completion by mid-June.  "We won't focus the efforts on any one area of town, but continue to do what we do on a regular basis and that is repair potholes in various locations in  town," Shoemaker said.

The City promotes citizen use of its Pothole Hotline, 394-4152, to report locations of potholes and the City's Street Department crews work to provide same-day or next-day response in most instances.

“Cracks, bumps and potholes can easily ruin a good carryout pizza, and nobody wants that,” said Allan Erwin, Rapid City Domino’s franchise owner. “We’re thrilled that Rapid City was selected as a grant recipient to help smooth the ride home for our carryout customers.”

Domino’s launched its Paving for Pizza program in June, asking customers to nominate their town for a grant to repair potholes. Since the program launched, Domino’s received more than 137,000 nominations from 15,275 different zip codes in all 50 states. Customers submitted so many nominations that Domino’s decided to expand the program to pave one community in each state.