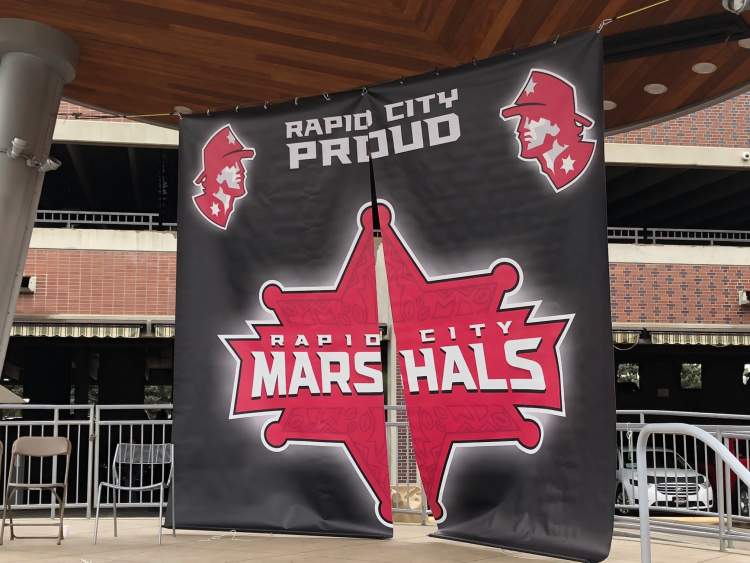 PROFESSIONAL INDOOR FOOTBALL RETURNING TO RAPID CITY FOR THE 2022 SEASON

(September 3 , 2021 - Rapid City, SD) – Amongst local business leaders and soon-to-be fans, officials from a South Dakota based group, Pick-Six Entertainment, LLC announced today their plans to launch a new professional indoor football team in Rapid City for the 2022 season. The brand new team will be involving local business leaders and will play in Summit Arena at The Monument beginning in March of next year. The group announced not only their arrival, but also plans to hire a local staff, integrate into Rapid City life, and they ended with the unveiling of the teams new name and logo...enter the “Rapid City Marshals”.

“We are very proud of our teams in Gillette and Billings and how they fit into their respected communities.  However, Rapid City was always our first choice when considering launching a team. We are so pleased that the timing is finally right and we look forward to providing the people of South Dakota with a team that they can take great pride in,” explained team co-owner Keith Russ. He and partner Tel Koan started Pick-Six over a year ago launching the Wyoming Mustangs, a professional football team playing in Gillette, Wyoming this past season in front of sellout crowds each game. “We have been treated with such great hospitality from Mayor Allender, to Craig Baltzer at The Monument and all of the other city leaders.  We will do our best to make certain that we provide something very special to this community.” added Koan.

Proud members of the CIF (Champions Indoor Football), the Rapid City Marshals will compete with opponents from all over the upper-Midwest down through Texas in a 12 game season (6 home games) starting in March of 2022. Games are fast paced, high-scoring, and surrounded with family-oriented entertainment from a tailgate party throughout the game and even into the post-game autograph session and activities. The team provided a tentative time line on when the fans and the community can expect to meet a new head coach, see team uniforms, visit new team offices, watch the team participate in the community and schools, and be able to buy tickets over the coming months. “Rapid City is a remarkable city with passionate sports fans who I believe will embrace all that the CIF has to offer. The league and its directors are all very proud to have the Marshals and its fans as part of our growing family.” stated Interim CIF Commissioner Tommy Benizio.

For further information on these or other team topics, please visit www.RapidCityMarshals.com or call 605-596-0965.

So What’s in a Name? About the Rapid City Marshal’s New Identity and Marks

“There are so many tremendous attributes unique to our community here in Rapid City, from monuments to mountains, aviation to nature, we considered many options., explained team co-owner Keith Russ, “In the end, the people’s passion for old west excitement and culture won out and we are proud of the results.” Unlike the CIF’s Outlaws (Billings) and Bandits (Sioux City), the Rapid City western icon will proudly serve as a hero of the era as US Marshals maintained law and order during a short time period where those qualities were hard to come by.

The logo was created by the renown European Football Brand designer, Christopher Payne. “Shifting from the world of soccer to American football has been a wonderful and appealing challenge for me”, said Payne, “I am excited to see players and fans proudly wearing logos that represent the history of Rapid City in such a fun manner.”

The first of the dual set of logos is the iconic Marshals badge just like the ones carried by the brave warriors of law in the 1800’s. It is detailed with the same markings engraved into those badges but with the addition of small footballs as a reminder to on-lookers of who we are.

The second logo depicts the man himself, the confident and bold Marshal proudly displaying his own badge as he patrols Rapid City just preparing to fight for the law and the citizens of South Dakota!

The logos consist of a Black Hills BLACK in honor of the beautiful mountain range in which we enjoy living amongst and Reflection SILVER representing the distinct color shining off of these mountains.  Finally, the logo bears a Marshals RED which is to serve as a reminder to our opponents of just how fierce this team will be!