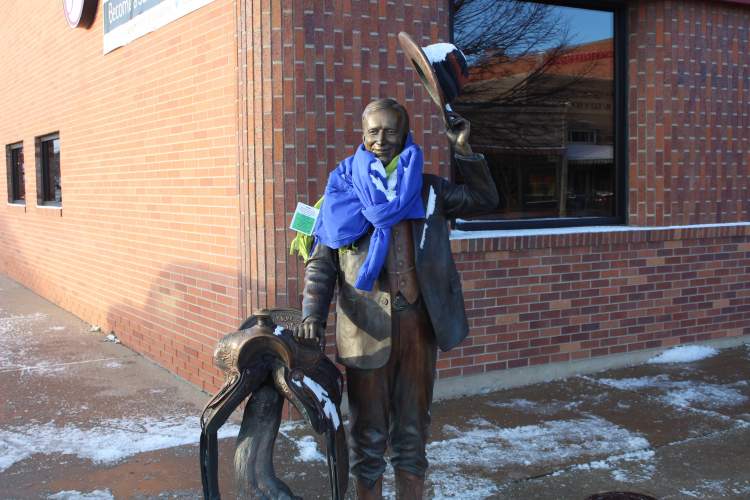 We’re not talking about scaling Mount Rushmore and placing over-sized stocking caps on the heads of the four faces of the Shrine of Democracy.  Rather, it’s time to outfit the 43 presidential statues in downtown Rapid City with winter apparel items to benefit those in need.

Tuesday (November 15) marks the eighth season when winter apparel items can be placed on the downtown statues. During wintery conditions, items such as gloves, scarves, ear muffs, hats, coats, even socks, are collected by those in need of the items.

"We’ve already started to see some items appearing on the statues,” said Mayor Allender.  “There’s always a great outpouring of support in the community for this effort. The simple gesture of placing that pair of gloves, winter scarf or stocking cap on a downtown statue will have an immediate impact on the person who stops to collect them. And it impacts the person donating and placing the item on the statue, knowing they are making a difference in a person’s life.”

Many church, youth and other groups and organizations will organize efforts to place several items on the statues at one time.  On Tuesday, a group of residents from the Echo Ridge Good Samaritan Society independent living facility will place homemade crocheted winter apparel items on some of the statues.

“We have a group of residents who have spent several months crocheting scarves and some other items for placement on the statues,” said Angela Wiederich, senior living manager at Echo Ridge.  “They have made over a dozen items to be placed on the statues and are hoping the items will keep several people who are in need, warm this winter.”

After March 15, any items placed on the statues will be removed.

The authorized placement of winter apparel items on the downtown statues coincides with National Hunger and Homeless Awareness Week, this year observed November 12-20.  Mayor Steve Allender presented a proclamation at last Monday’s City Council meeting declaring National Hunger and Homeless Awareness Week in Rapid City., bringing awareness to the issues of food insecurity, poverty and homelessness affecting children and adults in the community.  The proclamation also recognizes the work of numerous community organizations to provide support services and increase public awareness about those living without homes and those living in need in the area.  These organizations include the Hope Center, Volunteers of America, the Black Hills Regional Homeless Coalition, the Youth Task Force, Cornerstone Rescue Mission, Working Against Violence, Inc., Feeding South Dakota and others.