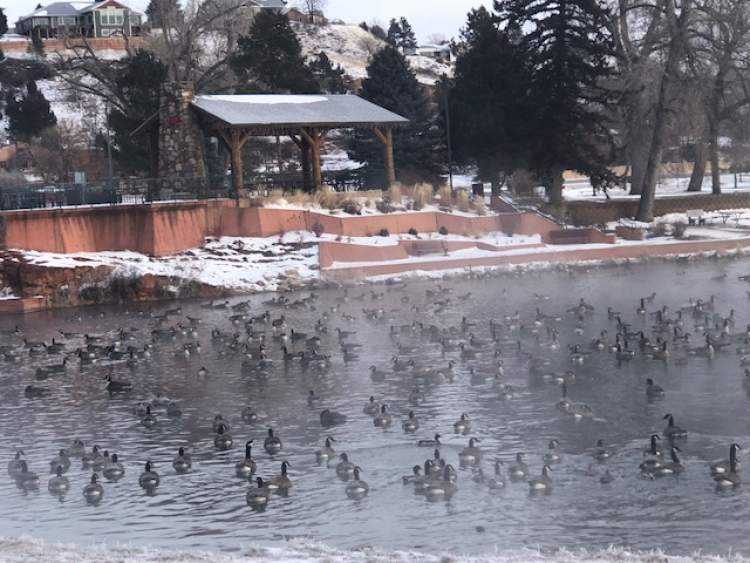 Geese reside on Canyon Lake on a partially-foggy morning in December 2022. (City Photo by Darrell Shoemaker)

OF DEAD GEESE AT CANYON LAKE

impacting many areas in state

City Parks and Recreation staff retrieved the carcasses and have been in contact with South Dakota Game, Fish and Parks (GFP) officials, who indicate some of the carcasses are being sent off for testing.

Canyon Lake is currently home to thousands of waterfowl such as ducks and geese.

GFP officials have reported significant cases of Avian Influenza in snow geese and other migrating waterfowl in the state in recent weeks. GFP encourages the public should report dead or sick birds to the agency, which is documenting the mortality numbers.  Local GFP officials are aware of the instances at Canyon Lake and encourage the public to contact the agency if they encounter unusual behavior in waterfowl or other birds such as raptors in other areas of Rapid City or the region.  The public can report cases to the agency’s Outdoor Campus West facility at 605-394-2310.

“Cold weather and freezing conditions this time of year concentrate migrating waterfowl and create ideal conditions for the spread of avian influenza,” said Nick Harrington, communications manager for South Dakota GFP.  “Mortalities are occurring wherever these birds are staging, much like they did this spring. We expect this will continue until migrating waterfowl leave South Dakota or enough birds have been exposed to reduce transmission.”

Individuals do not need to be concerned about infection, but should always follow common sense practices when handling any game.

Individuals who see sick birds or find dead birds can contact GFP at This email address is being protected from spambots. You need JavaScript enabled to view it. or their local conservation officer.  More information on avian influenza can be found at: https://gfp.sd.gov/avian-flu/

City officials also advise the public to not approach or feed the geese and other waterfowl and do not touch the carcasses.

“Even before the avian flu outbreaks, the public has been advised not to approach or feed the waterfowl,” said City Parks and Recreation Director Jeff Biegler. “We are not discouraging the public from enjoying Canyon Lake.  We are making the public aware they may encounter waterfowl carcasses or unusual behavior among some birds, and also advising precautions and actions they can take.”

Biegler said Parks staff will be monitoring Canyon Lake daily and retrieving any carcasses.  He said staff are taking proper safety precautions when handling the carcasses.