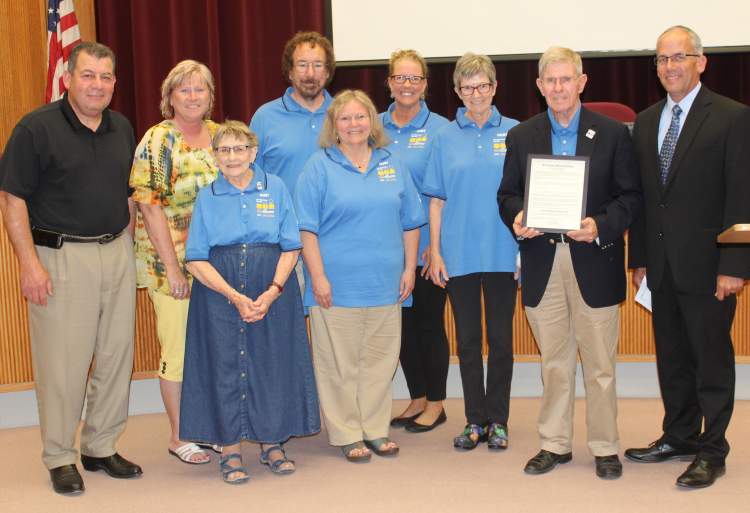 In this June 2017 photo, Dr. Richard Gowen and his steering committee that worked on Rapid City hosting the International Collegiate Coding Championship, an event that brought hundreds of the brightest young minds in the world to Rapid City. The group was honored by Mayor Allender and the City Council for their efforts. (City File Photo/Darrell Shoemaker)

“I am saddened to learn of the passing of Dr. Richard Gowen.  Dick led an exemplary life and everything he did, he approached with a tireless commitment to excellence.  He approached projects as he did life, with a head-on approach and a full-speed dedication to giving it all he had and then some, and expecting those around him to do the same.

As long-time president of South Dakota Mines, Dick led efforts to establish new programs, buildings and research opportunities to benefit students and faculty alike and he was committed to developing home-grown, entrepreneurial opportunities to keep Mines students in our area after graduation.  He was instrumental in transforming the Homestake Gold Mine to what would become the Sanford Underground Science Laboratory.  In 2017, Dick’s tireless efforts resulted in Rapid City hosting the International Collegiate Programming Contest, bringing hundreds of the world’s brightest young people to our community to compete in an Olympic-style coding competition.

He welcomed and enjoyed challenges and was committed to developing better graduates, a better community and a better world at large.   Shirley and I extend our heartfelt condolences to Dick’s wife Nancy, their five children and extended family members.”