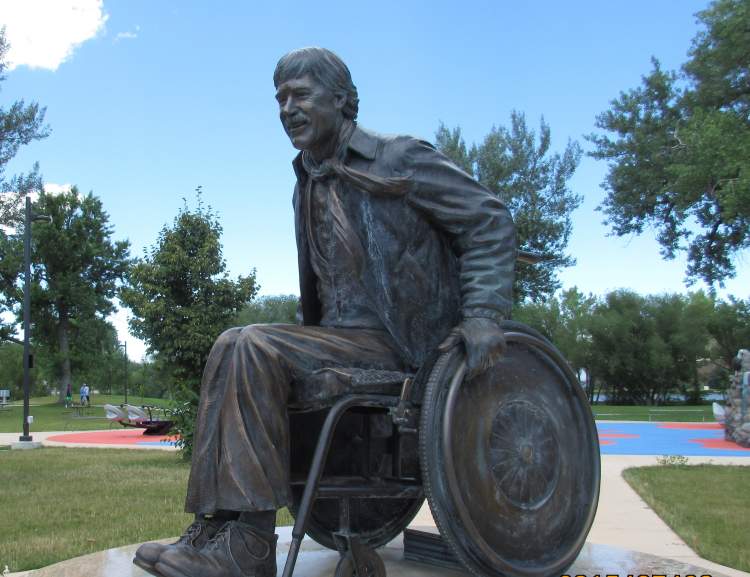 The Scotty Backens statue in Memorial Park pays tribute to the work, advocacy and efforts on disability issues of Backens, a long-time member of the Mayor's Committee for People with Disabilities. (City File Photo/Darrell Shoemaker)

Office of the Mayor

WHEREAS, the Americans with Disabilities Act (ADA) was passed on July 26, 1990 to ensure the civil rights of citizens with disabilities; and

WHEREAS, the ADA prohibits discrimination against individuals with disabilities in public accommodations, employment, transportation, state and local government services, commercial facilities and telecommunications; and

WHEREAS, through the dedicated and tireless efforts of officials, organizations and advocates, many strides have been made, and work continues, in breaking down the physical and attitudinal barriers that have challenged people with disabilities; and

WHEREAS, numerous organizations in Rapid City work with constituents to bring forth the promise of hope and freedom envisioned by the passage of the ADA; and

WHEREAS, The City of Rapid City continues its commitment to ADA compliance and accessibility with improvements to public facilities, providing increased quality-of-life experiences in the community for people with disabilities; and supporting the continued work and awareness efforts of the Mayor’s Committee of People with Disabilities; and

WHEREAS, July 26, 2020 celebrates the 30th Anniversary of the Americans with Disabilities Act.

NOW, THEREFORE, I, Steve Allender, Mayor of the City of Rapid City, South Dakota do hereby proclaim July 26, 2020, as

In the City of Rapid City, South Dakota.

IN TESTIMONY WHEREOF, I have hereunto set my hand and caused to be affixed the seal of the City of Rapid City this 22nd day of July, 2020.