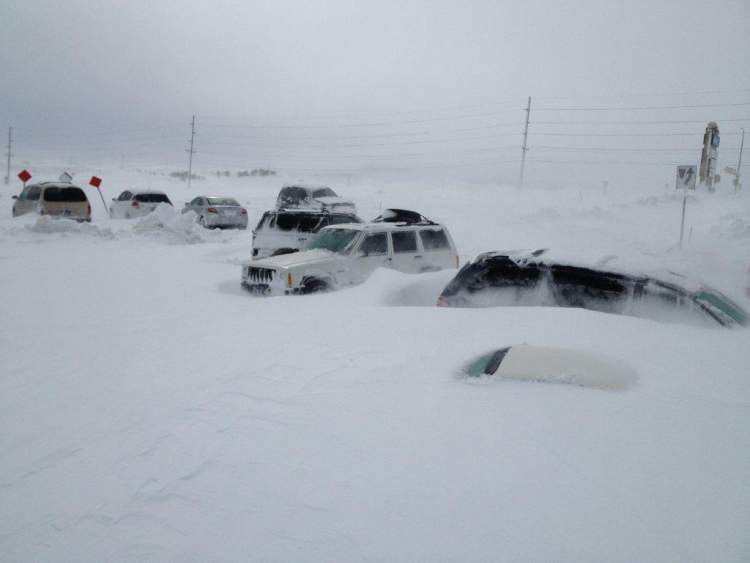 Winter Storm Atlas hit the area October 3-5, 2013. This scene is near the Lacrosse Street Walmart. The Atlas anniversary is an opportunity to begin planning for the upcoming winter season. (City File Photo)

It was seven years ago this month, the weather system named 'Winter Storm Atlas' or 'The Great Blizzard of 2013' or 'The Cattlemen's Blizzard' devastated the region. The Thursday-Saturday storm (Oct. 3-5, 2013) resulted in considerable damage with downed power lines and trees, which had not yet dropped their leaves and broke under the weight of the heavy snows. There were considerable livestock deaths through the region as well.

Local residents will remember the massive mounds of trees that were brought to Fitzgerald Stadium, Central States Fairgrounds and other locations for grinding and removal.

This anniversary date is also an opportunity for citizens to review and prepare for the winter season: find that ice scraper, check your tire pressure and quality of tires, make sure you have a set of jumper cables, check the antifreeze and quality of your battery, etc.

The Atlas anniversary is a good opportunity to get that winter travel survival kit together for your car and assemble items in your home should you be homebound for a few days due to winter weather or you experience an extended power outage. Get the snow blower fired up or find the snow shovel.

Now may be the time to inquire with a neighbor or make arrangements for snow removal around your home if you are unable to remove snow due to age or disability. Or check with an elderly or disabled neighbor if you can assist them with their snow removal.

Below is information on City snow removal policies, messages from City officials and other important information:

SNOW AND ICE REMOVAL (SIDEWALKS):  Per City Ordinance 12.12.090, it is the duty of the homeowner to keep the sidewalk(s) fronting or abutting a lot, parcel or plot of ground free from snow and ice at all times.  When it is impossible to take the snow and ice from the walk by reason of it be being frozen to the sidewalk, the owner or occupant shall sprinkle or spread suitable material to prevent the walk from becoming slippery and dangerous to travel.  Sidewalks that are not kept free from snow and ice are declared a nuisance, and upon the failure, neglect or refusal to comply, the owner or occupant may be held in violation.  If the snow and ice is not removed within 24 hours, the City can have the area cleared of snow and ice with the costs assessed to the property.

*There are over 400 miles of streets in Rapid City.  Most of the streets are multi-lane with two, three and four-lanes of traffic.  Stretching out the lanes and the 400 miles expands considerably.   During a particular snow event, City crews can be traveling a distance from Rapid City to California and back.

*RAPID CITY FIRE DEPARTMENT: Interim Fire Chief Rod Seals asks the following from residents and visitors of Rapid City and the surrounding area:  When advisories are issued, like “no travel advised”, please heed the warning for your own safety and of those that count on you.  If you don’t need to go out, please don’t.  If you must travel, be prepared.  A winter travel kit in your vehicle can come in handy even if you are traveling in and around the City.  (extra clothing, water, blankets, food, shovel, ice scraper, phone charger, etc).  Maintain your vehicle for winter travel.  (tires, wipers, battery, antifreeze, etc.)

*RAPID CITY REGIONAL AIRPORT: If the airport is closed, personnel will alert the media.  If the runway is closed, updates are provided through their website and social media.  Airlines may sometimes cancel or delay flights based on conditions even if the runway is open so airport officials always recommend the public to check with the specific airline regarding flight status.