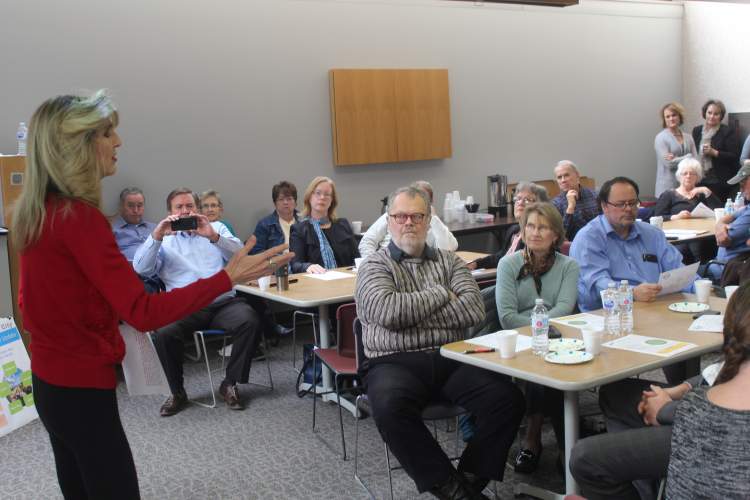 Community Planning and Development's Vicki Fisher addresses a standing-room only crowd in the Community Room November 8. The "Coffee With Planners" event was hosted by the Department with a number of issues addressed, updates provided and questions fielded. (City Photo)

A standing-room only crowd attended the first 'Coffee With Planners' event held in the Community Room of the City/School Administration Center Nov. 8.

The event was hosted by the Community Planning and Development Department.  Department Director Ken Young greeted the crowd of more than 60 people, introduced division staff and provided updates in the Department.  There was also time for questions from the audience and time for one-on-one discussions between the audience and staff members afterward.

Young was pleased with the attendance for the first event, which he plans to host on a quarterly basis with the next meeting scheduled for February.   He said the sessions provide a great opportunity for staff to inform the public as well as to sit back and listen to recommendations, advice and concerns from the public.

"We want to take advantage of the synergy that is out there to move forward and improve our community," said Young.

Vicki Fisher of the Current Planning Division said her favorite part of the coffee event was the questions from the public and the opportunity to listen.

A number of questions and recommendations were fielded from the public, including a discussion on how to re-purpose some of the larger buildings downtown, such as the former auto dealership facilities.