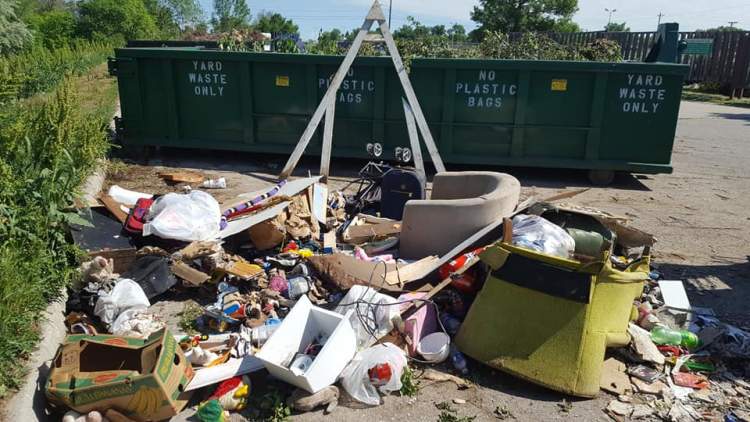 OFFICIALS REMIND PUBLIC OF PROPER USE

RAPID CITY, SD--An uptick in the dumping of inappropriate items is being reported by City officials at the remote yard waste sites at the Fitzgerald Stadium and West Boulevard North sites.  Officials remind the public the sites are for yard waste only, and limited to residential use only. The sites can also be used for disposal of recyclable and cardboard items.

The remote yard waste sites were opened to the public on April 1 and have been used annually by thousands of residents for collecting yard waste, tree branches and similar items.  In recent weeks, there has been an increase in the dumping of items such as household garbage, fencing, furniture, paints and other items.

"Unfortunately, this appears to be a major problem each summer for the Solid Waste Division," said Jancie Knight, Solid Waste community outreach coordinator. "Whether they are unaware or don’t care, when non-yard waste items are placed in the dumpsters or tossed outside the containers, it takes City staff away from their day-to-day duties to clean up these areas.

"The non-yard waste items must be hand-removed because they do not break down into compost and they can contaminate the entire yard waste load. This results in significant staff time spent pulling the contaminants out, sifting through the load and grinding it, prior to starting the composing process."

The Solid Waste Division recently posted a pair of videos on their facebook page highlighting the issue.

Illegal dumping, whether at the city remote yard waste sites or within city limits, is against city ordinance and violators can be subject to a fine.

Officials also remind the public the facilities are for residential use only.  Commercial entities disposing of large loads at the remote sites results in containers filling rapidly and increasing overflow dumping outside of the containers. All commercial and overly-large loads of yard waste should be taken to the City Landfill.

Knight says the green waste containers can fill up quickly and it takes staff 45 minutes per trip to remove and return bins from the locations.  If bins are full, the public is advised to wait a short period of time for new bins to arrive or take the yard waste to the landfill yard waste disposal site, which is available 24 hours a day, seven days a week.