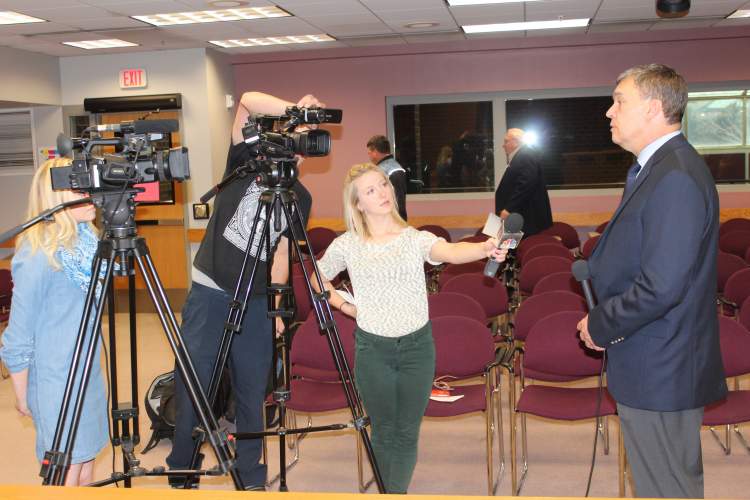 City Engineer Dale Tech takes questions from local media after his appointment by Mayor Steve Allender to serve as the City's Director of Public Works. The appointment will be up for confirmation by the City Council on May 15. (City Photo)

RAPID CITY--Dale Tech, long-time City engineer and who has served as interim public works director for the past 16 months, has been selected by Mayor Steve Allender to fill the director position in a formal, permanent capacity.

The selection will go to the City Council for confirmation May 15.

"I have come to know him as a professional engineer who can translate complicated engineering issues into layperson terms and someone who can negotiate and work with contractors and developers."

Tech began serving the residents of Rapid City as city engineer in May 2008.  He holds a Bachelor of Science degree in civil engineering from the University of Nebraska-Omaha, is a registered professional engineer and registered land surveyor.  Prior to working with the City, Tech served eight years as an engineer and drainage engineer for the Pennington County Highway Department.   He worked six years with the US Army Corps of Engineers and has four years of experience in the private sector as a construction foreman and three years as a purchasing manager and inventory control manager.

Upon confirmation by the Council, the City will also begin the selection process to fill the open city engineer position.

Tweet
More in this category: « City Recognizes Firefighters With Proclamation Library celebrates grand opening of renovations: 'Check It Out'! »
back to top