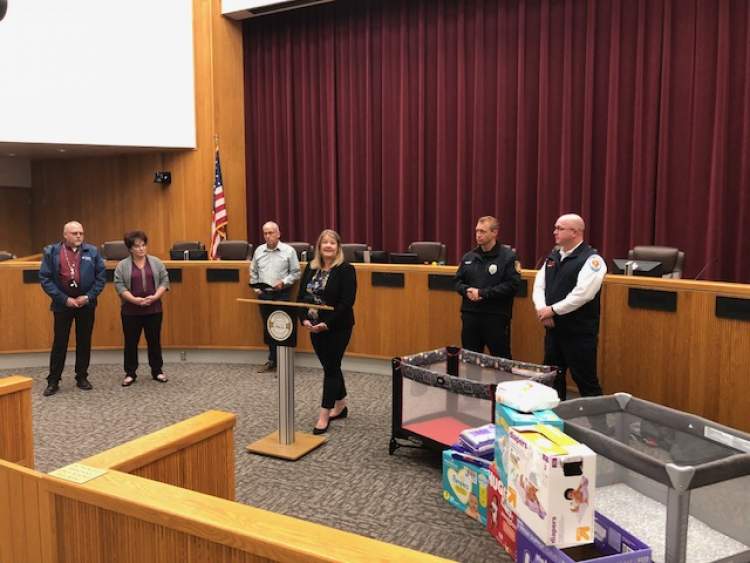 Mayor Steve Allender is proclaiming next week, September 26-October 2, as Diaper Need Awareness Week in Rapid City.  The Diaper Drive is a project undertaken by Volunteers of America (VoA).  City Hall, Fire Station 1, the Rapid City Public Safety Building, Mommy’s Closet and the Black Hills Pregnancy Center will serve as collection points.  Mayor Allender is encouraging citizens to donate generously to the diaper drive during Awareness Week and throughout the year to diaper banks, diaper drives and organizations that distribute diapers to families in need in the community.

All sizes of children’s diapers will be accepted with an emphasis on size five diapers since young children remain in that size longer than the other sizes.  Check and cash donations will also be accepted.

“The community deserves credit for responding every year to the annual Diaper Drive,” said Mayor Allender.  “The donations of diapers serve a very real need for our low-income families, who are coping with increased costs for most all items.  Any relief, especially when it assists our youngest children, is welcomed.  I’m encouraging the community to respond as they have in the past.”

Volunteers of America is also conducting a letter campaign in the community during the Diaper Drive. The goal this year is to collect 20,000 diapers.  More than 9,300 diapers and wipes were collected at City Hall and other collection sites during last year’s community-wide Diaper Drive effort.

*City Hall, 300 Sixth Street: For a sixth consecutive year, the front lobby of City Hall will serve as a collection point Monday, September 26 through Monday, October 3.

*Public Safety Building, 300 Kansas City Street: The Rapid City Police Department and Pennington County Sheriff’s Office are working together and diaper donations can be dropped off at the civil window on first floor of the public safety building Awareness Week.

Monetary donations will also be accepted during the Diaper Drive.  Checks can be mailed or dropped off to Mommy’s Closet at 111 New York Street, Rapid City, SD 57701 or donations made online at www.voanr.org/diapers  through October 3.  VoA officials indicate $10 provides a package of baby wipes, $25 a pack of diapers, $35 a combination pack of diapers and wipes, $500 a pallet of diapers. Corporate efforts include TSP Architecture purchasing a pallet of diapers as part of the week-long collection drive.

For more information about Mommy’s Closet, contact 605-341-8336 or visit www.voanr.org/diapers to learn more about the diaper drive.