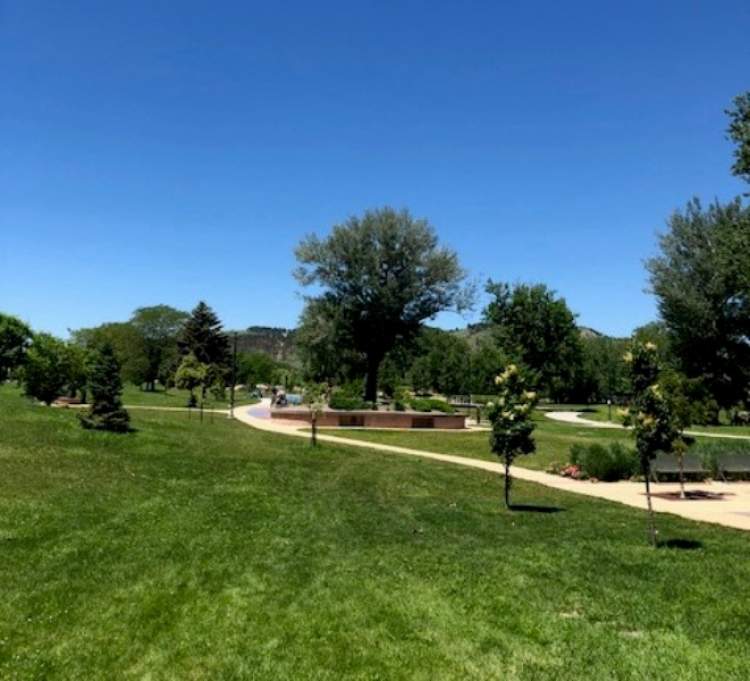 Memorial Park, along with Founders Park and the Executive Golf Course area will be among fogging operation areas for City crews. These areas are expected to have a high concentration of viewers for the City's Independence Day fireworks display July 4. (City Photo/Darrell Shoemaker)

RAPID CITY--June's heavy rains coupled with warm temperatures have produced the summer's first hatch of mosquitoes.  In response, the City will be conducting fogging operations beginning this evening (July 2) and continuing through the summer.

Parks Department indicates operations have slowed and are limiting efforts to occasional barrier spray applications, which is being done in park areas where publics may be attracting for events.  Reminder that operations are conducted generally from 10 p.m. to 2 a.m. and are dependent on weather conditions.

Beginning the week of August 13, crews will be prioritizing park areas especially areas hosting public and school activities.  Remember, fogging operations are generally scheduled between 10 p.m. and 2 a.m. and are dependent on weather conditions.

August 10-12:  Treatments tonight through Sunday night will include finishing up in south Rapid City (south of Saint Patrick Street), the Elks Country Club area and the Knollwood drainage area and neighborhoods. Beginning next week, crews will be prioritizing park areas especially areas that are hosting public and school activities.

August 9: Crews will be fogging in west Rapid City, south of Canyon Lake Drive as well as the general Robbinsdale area.

JULY 24 UPDATE:  Crews will be finishing up in the southeast part of the City tonight and moving back into the west side.  Focus will be Jackson Boulevard/Canyon Lake Drive area to Red Rocks area to the southwest corner of Rapid City.   Areas included: Canyon Lake area, Red Rock Development, Sheridan Lake Road area, Mountain View Cemetery, Jackson Boulevard, Braeburn Dog Park, Trout Court and nearby areas.

JULY 20 AND WEEKEND (10:45 a.m. update): Efforts tonight and through this weekend will include east of Fifth Street, south of St. Patrick Street to Elk Vale Road and Catron Boulevard.  Crews will also be focusing efforts in the Robbinsdale Park, Centennial Park and Parkview Park areas and the Fox Meadows Subdivision.  With the Hills Alive event this weekend, crews will also be working in the Memorial Park area.   Fogging operations are always dependent upon weather conditions.

JULY 16 AND APPROXIMATE AREAS THIS WEEK:  Crews will be fogging this week, beginning this evening in the following areas: Elks Country Club off of Jolly Lane; Southeast Rapid City including east of Mount Rushmore Road (Eighth Street) to the eastern city limits, south of E. Omaha Street to Catron Boulevard.

JULY 13 AND WEEKEND (1:55 p.m. update): Efforts tonight and through the weekend will include continued focus in the North Rapid and West Boulevard areas.

JULY 9 (2:15 p.m. update): The focus of mosquito treatment operations will be in North Rapid this week, from M Hill to Cambell Street/East North, Omaha Street to the northern city limits and to include Vicki Powers Park area.

JULY 6 AND WEEKEND (10:15 a.m. update): The focus of the fogging crews later tonight and Saturday morning will be finishing up the West Chicago area mostly east of Wilderness Park and on other northwest portions of the City, primarily west of 32nd Street, north of W. South Street.  Crews will finish up these areas late Saturday evening/Sunday morning if necessary.  Late Sunday evening/early Monday morning, crews will finish up areas along West Boulevard to Elm Street, and St. Joseph Street to Flormann and will initiate fogging operations south of Jackson Boulevard.

JULY 5 (3:30 p.m. update): Due to Tuesday evening's rain, fogging crews will continue operations in these same areas later tonight and into the early hours of Friday-- Robbinsdale area near South Fifth Street; West Boulevard to Elm Avenue, St. Joseph Street to Fairmont Boulevard areas.  In addition, crews will be operating in west Rapid City north of Range Road near Rapid City Stevens.  Crews will also be fogging in the Founders Park and Memorial Park areas.

(JULY 3--9 a.m. update):  Crews will be finishing up tonight in the Robbinsdale area near South Fifth Street then moving on to West Boulevard to Elm Avenue, and St. Joseph Street to Fairmont Boulevard areas.  In addition, fogging operations will continue in west Rapid City north of Range Road near Rapid City Stevens.  Crews will also be fogging in the Founders Park and Memorial Park areas later this evening/early morning hours of Wednesday, July 4)

(July 2: Parks officials will be spraying in the Robbinsdale and West Rapid City areas later this evening and into early morning hours of July 3)

Parks Department officials are requesting anyone with beehives in the City to take necessary actions to preserve their hives.  Local beekeepers with concerns about spraying in particular beehive locations should contact the City Parks Division at 394-4175.

"The fogging plan will be a wide swath through the city between now and for a good portion of the summer," said City Parks Division Manager Scott Anderson.  "The City experienced the initial hatch late last week and the calls are coming in from every area of town."

In May, the City's Parks Division and Stormwater Drainage Division crews placed larvicide briquettes in standing water areas as a proactive measure to control mosquito larvae.  The heavy and consistent rains in June followed by warm temperatures resulted in an initial hatch late last week.

Anderson says priority fogging will take place the next two days in the Founders Park, Executive Golf Course and Memorial Park areas where large concentrations of people are expected for Wednesday night's City fireworks display.  Crews will also be fogging in other public areas such as public parks and baseball fields.

Crews generally conduct fogging operations in the late evening to early morning hours, typically from 10 p.m. to 2 a.m.  Anderson says conditions must be nearly perfect with no precipitation or wind for fogging operations to be effective.

Anderson says residents and visitors to the area can take important steps to limit exposure to mosquitoes.

"It's important for the public to take necessary precautions including the use of mosquito repellant and wearing proper clothing, such as long-sleeved shirts and long pants," advised Anderson.  "Mosquito repellants containing DEET are recommended.  It's also important for residents to get rid of any standing water areas around homes where mosquitoes can lay their eggs and larvae can grow.

For more information or to report problems, contact the City Parks Division at 394-4175.