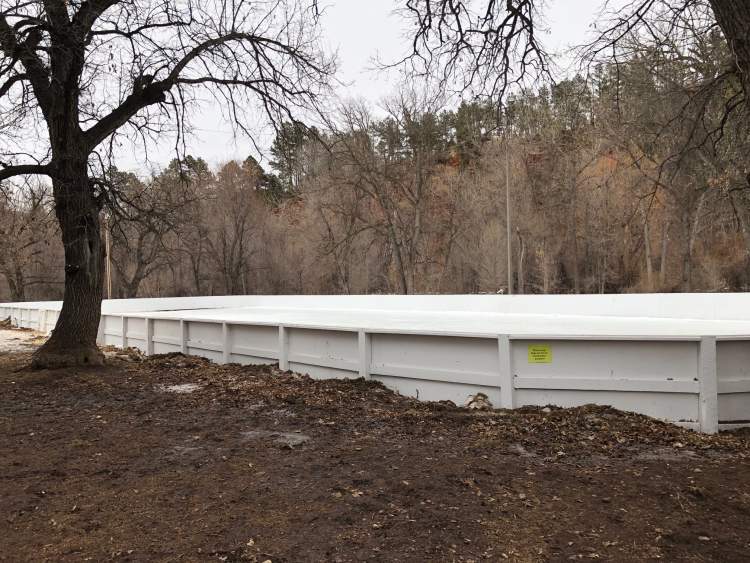 RAPID CITY, SD--For decades, the Braeburn Park ice rink was a haven for pick-up hockey games among friends - an opportunity for some exercise and fun for hockey fans of all ages.  If you loved hockey, wanted to strap on the skates and get in some action, the Braeburn ice rink west of the fish hatchery was one of the few 'barns' in Rapid City to chirp with friends and put the twig on the biscuit!

Competitive hockey found homes at the Roosevelt Ice Arena and the Rushmore Thunderdome on Old Folsom Road. Then came the Rapid City Rush and the Civic Center Ice Arena. The City stopped flooding the Braeburn rink during the winter seasons about 20 years ago and the boards fell into disrepair. The area literally went to the dogs as the public used the surrounding area to run their dogs for exercise rather than chase the puck around the ice.

The Braeburn rink area became a relic of Rapid City's past. Until now.

The City's Parks and Recreation Department, responding to requests from the public in recent years, has given the ice rink a facelift, infusing new life into the old cylinder. This week, the Department took to its facebook page advising the public the rink is again open for public use.

"We started work on repairing the boards a few years ago as they were falling apart," said Scott Anderson, City Parks Division Manager.  "It was either take them down or fix them up.

"We decided to take a section and fix, replace, paint and get it back into shape. We did a section a year for the last three years and finished this fall."

Crews flooded the rink earlier this winter and fixed some additional issues that surfaced.  Lights have been installed. Anderson says the rink is ready for action.

"All the boards around the outside of the rink have either been repaired or replaced, and all have been painted," said Anderson.  "We have a pump that sucks water out of the creek.  We added some pipe and fittings just outside the boards on the south side of the rink to hook up hoses and make it a little easier to drag them around."

Anderson says the lights are scheduled to come on around dusk each night and shut off around 9:30 p.m.  The Braeburn rink is in a good location with the big hill to the south providing shade most of the time.  He says a liner may be added in the future to hold the water better and provide a more consistent sheet of ice.

Anderson says the Parks Department continues to flood Wilson Park each winter for skating action.  Years ago, other skating options included the area across from Storybook Island and the Sioux Park tennis courts.  Only Wilson Park has continued to serve as a winter skating area, surviving development and infrastructure improvements.