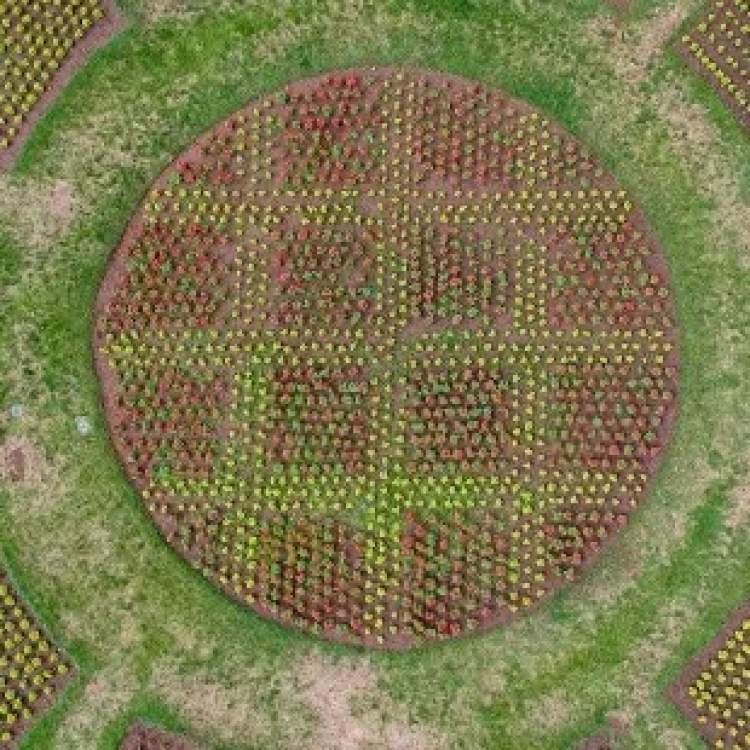 RAPID CITY, SD—Provide a dessert chef with a couple cans of cherries or a basket of fresh, red, heart-shaped cherries and they’ll likely produce a cherry pie fitting for the summer picnic table.

This past spring, John Berglund didn’t have a basket of cherries to work with, but the City’s Greenhouse specialist was looking for a way to celebrate this year’s Independence Day holiday and summer season.  The last few summers, Berglund produced a flag flower garden at Otto’s Corner, at the intersection of West Boulevard and Omaha – a combination of purple, red and white flowers to showcase a flag-flower image as residents and visitors came into town.

“I wanted to cook up something special for this Independence Day holiday,” said Berglund.  “I’d tried the flag flower garden a couple summers and thought I’d go with something different.”

This spring, as he gazed at the more than 27,000 flowers in the City’s greenhouse, Berglund worked to devise the right color combination to produce something special for Independence Day and the second half of the summer.

Turn a gardener loose with the right colors and a patch of ground and they can produce all sorts of tantalizing color combinations, much like a pastry chef can do in the kitchen when given the right ingredients.

Berglund took to the scratch pad to see how he could devise a cherry pie flower garden that would show off appealing colors just in time for Independence Day.  He decided he would cook – plant – his cherry pie concoction at Sunken Gardens near his office off Canyon Lake Drive near McKeague Field.

“I wanted to keep a close eye on it,” said Berglund.

He looked into his Greenhouse pantry to see what he had for ingredients to work with.  He needed just the right colors and the right numbers to produce what he envisioned.

His final recipe combined 1,040 ‘cups’  – or trays -- of Zinnia Magellan Cherry flowers to produce the cherry filling, combined with 720 Coleus Lime Delights flowers for the ribbon or lattice ‘crust’ of the pie.  Berglund laid down the proper ‘portions’ of flowers in the center pie-shaped circle at the Sunken Gardens. He combined the flower mixture with a generous dose of sweat labor provided by his crews, along with just the right combination of heat, water and sunlight and a pinch of good luck – no hail storms -- supplied from Mother Nature.

The end result is a cherry lattice or ribbon pie that looks beautiful from ground level whether driving along Canyon Lake Drive, biking or jogging on the City bike path or heading towards Old Storybook Island.  A drone’s view from above the Sunken Gardens area provides the artistic perspective Berglund envisioned.

“It was a challenge, but one I was willing to take to see what would happen,” Berglund said. “It took some work deciding the right flower numbers and combinations, then turning the crews loose to plant them all. It was then time to put it all in the oven and let Mother Nature take its course.

“At the end of the day, I like it and I hope the public does as well.”

The work of the City’s Parks and Rec crews can also be viewed at Wilson Park, Halley Park, Otto’s Garden and the Noordermeer Formal Gardens area at Sioux Park.

Tweet
More in this category: « Dozens of Athletes Preparing to Compete in This Week's Senior Games Mayor's Indian Boarding School Lands Committee To Provide Update, Seeking Input at July 8 Meeting »
back to top