Chris Cooper is June's Veteran of the Month 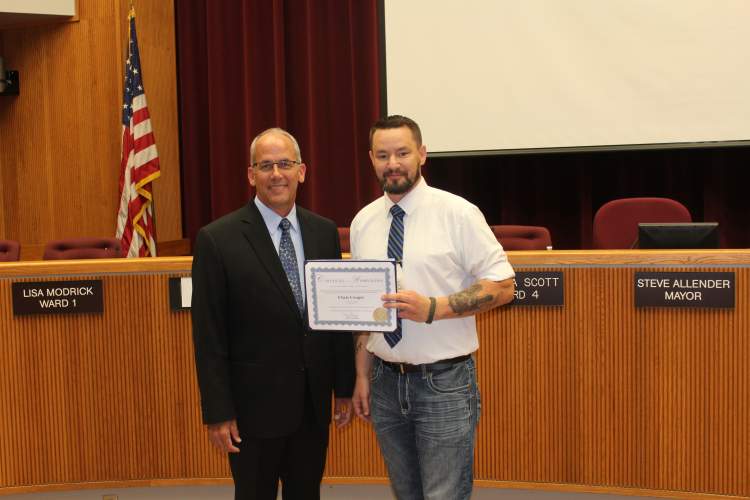 Chris Cooper (right) is congratulated by Mayor Steve Allender as June's Veteran of the Month for Rapid City. He was honored at the June 19 City Council meeting. (City Photo)

AIR FORCE VETERAN AND ADVOCATE IS CITY'S VETERAN OF THE MONTH

Chris Cooper was recognized at the June 19 City Council meeting.  Each month, a veteran is recognized for their military and community service by the City of Rapid City in partnership with the Veterans Coordination Commission.

Cooper served 10 years in the Air Force in a career field focused on oil and petroleum products.  He was in charge of fuel, liquid oxygen and liquid nitrogen at his duty station.  While at Elmendorf AFB in Anchorage, Alaska, Cooper served with the base honor guard.  During his military career, Cooper was awarded Honor Guardsman of the Month three times, Airman of the Quarter twice and Non-Commissioned Officer of the Quarter.  He received two Achievement Medals, one Accommodation Medal and over 200 coins from various chiefs, first shirts and commanding officers for great service actions.

He remains active in community events involving important issues.  He is currently organizing the second annual 22K Hike For Veteran Suicide Awareness July 9.  He participated and raised funds for the Walk A Mile In Her Shoes project, has worked with the Toys For Tots organization, and has been involved in fundraising efforts for several cancer organizations.  On Veterans' Day, he organized a group of volunteers to provide household repairs to veterans' homes in the area.  Recently, he was selected as an Ambassador/State Leader of South Dakota for Mission 22, an organization helping veterans with PTSD.

Tweet
More in this category: « Old Photo Reflects City's Growth Hidden Hero of the Month is Jennifer Kellsy »
back to top