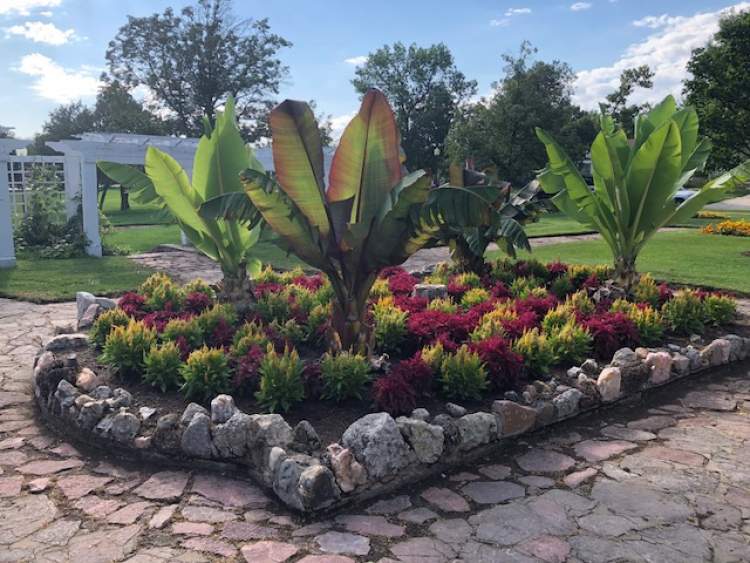 Each Summer in One of Rapid City’s Parks

The plants are thriving again for a sixth summer in Rapid City. People driving by on Ninth Street or walking along the sidewalk or through Wilson Park can’t help but stop and gawk at the big brutes as they stand guard over the Park’s rose bushes, Marigolds, Zinnias and other beautiful plants and flowers in the park.  The banana plants are nestled in a flower garden between two of Wilson Park’s gazebos.

The tropical plants are more accustomed to conditions more commonly found in rainforests.  But this quartet of banana plants have withstood Rapid City downpours, hail and windy conditions and have found residing in Rapid City parks in recent years much to their liking.

The plants were the brainchild of City Greenhouse Specialist John Berglund, who started the banana plants as an experiment six years ago.  Berglund placed the banana plants originally in Wilson Park and they have also spent summers basking in the sunlight at Halley Park and Noordermeer Flower Gardens at Sioux Park.

“They are awesome plants,” said Berglund.  “They always draw a lot of stares from pedestrians and drivers.  It’s not uncommon to see groups of people taking pictures of the plants or people pulling to the side of the road or stopping and doing a double-take, impressed by the size of the plants.

“I’ve been amazed at their ability to flourish with our conditions.  I took a chance six years ago and planted them on a whim just to see what would happen, never thinking they’d still be with us six years later. They seem to like our parks and love the attention.”

Berglund brings the banana plants inside for the winter months and nurtures them within the warmth of the City greenhouse, then gives them a new park to reside in each summer, resulting in a growing legion of fans in the community.

“This is a great time to get out and see the flowers in our parks,” said Berglund. “Everything is coming into their own as far as colors. There’s a lot of variety to see.  And when it comes to the banana plants, I’ve often said the annuals may provide the beauty and color but it’s the banana plants that bring the brawn and steal the show.”