Air Force Staff Sergeant Is March Veteran of the Month 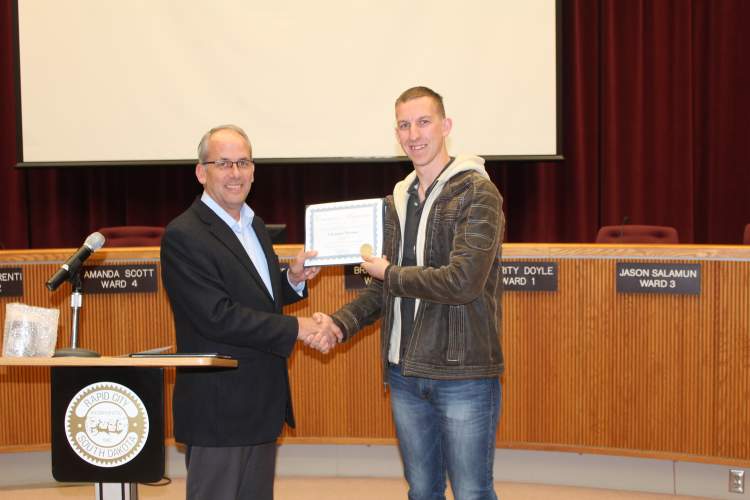 AIR FORCE STAFF SERGEANT IS MARCH VETERAN OF THE MONTH

RAPID CITY--Staff Sergeant Christian Messina, who enlisted in the United States Air Force in 2011 due to the ongoing war on terror and to make a contribution to changing the world for the better, has been named Rapid City's Veteran of the Month for March.  The City, in partnership with the Veterans Coordination Commission, recognized SSgt. Messina at Monday's Council meeting.

SSgt. Messina has supported B-1 missions for two years and is scheduled to deploy to Guam later this year.  He is a member of the Air Force Honor Guard, supporting the mission in the Air Force District of Washington and successfully completing 358 funerals at Arlington National Cemetery.   For full honors funerals, SSgt. Messina has performed rifle manuals and presented the colors at a majority of the services.   He represented the Air Force in the 2012 Macy's Day Parade, escorted the flight for the transition ceremony of the 17th Air Force Chief of Staff, and was selected for the presidential escort flight for the 57th Presidential Inauguration honoring President Barack Obama.  He was selected to be a Pentagon Tour Guide, where he gave tours to military officials, heads of state, and foreign dignitaries.  In 2015, he was assigned to Ellsworth Air Force Base as a B-1 hydraulic systems technician.

Since stationed at Ellsworth, SSgt. Messina has worked with Love, Inc., packing, storing and organizing over 14,000 pounds of food.  He has also participated in the United Way Day of Caring and serves in the Ellsworth Air Force Base Honor Guard, honoring local veterans and active duty members, with duties including the firing team, carrying caskets, folding the American flag, presenting the flag to the next of kin and playing TAPS.