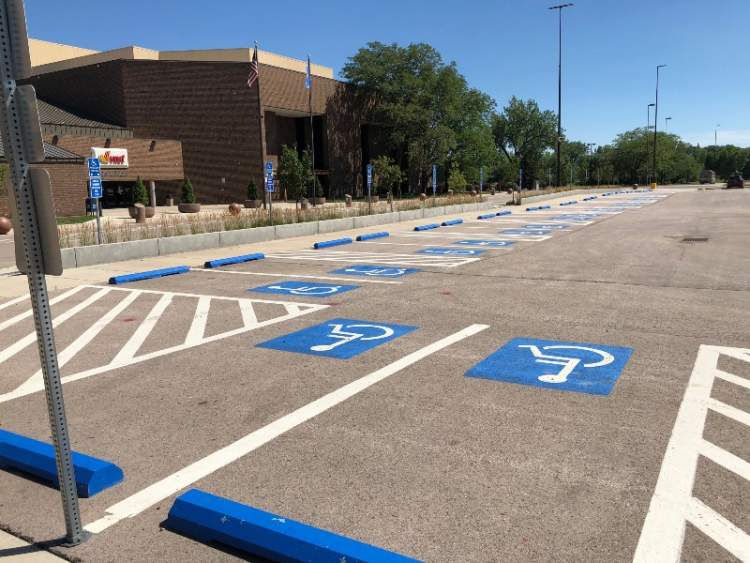 Disability parking was expanded and redesigned in recent years, part of the numerous ADA improvements made at City facilities. (City File Photo/Darrell Shoemaker)

RAPID CITY, SD--Sunday marks the 30th anniversary since the signing of the landmark legislation entitled Americans With Disabilities Act, commonly referred to as the ADA.

Upon this weekend's anniversary, officials are reflecting on the City's commitment to removing physical and attitudinal barriers affecting people with disabilities in the community.

"In the three decades since passage of the Americans with Disabilities Act (ADA), the City of Rapid City has been committed to addressing issues and barriers affecting residents with disabilities in our community," said Mayor Steve Allender.  "It's a commitment the community - from leadership and businesses to residents - must subscribe to every day."

The Mayor's Committee was formed in 1975 with an ongoing mission to advance, support and promote the equal inclusion, status and well-being of persons with disabilities in all aspects of Rapid City community life. Efforts include educating and informing the public, and fostering a better understanding of important issues to persons with disabilities.

"As a community, we have come to understand that a solid commitment to comply and adhere to the ADA benefits all of us, because just with age comes disabilities," said Catherine Greseth of the Mayor's Committee for People with Disabilities.  "We have made great strides in understanding and becoming more aware of all types of disabilities, including those that are invisible.  This has led to better access, accommodations, employment opportunities, and an opportunity for everyone to reach their fullest potential."

There are numerous improvements to accessibility throughout City facilities, parks and streets.  A few examples:

* In an effort to improve the accessibility of City Streets, the City programs $50,000-$100,000 each year for specific ADA improvement projects where we identify a deficient area and bring the intersection into compliance.  In some cases, funding may be “saved” and used for larger projects every two years instead of annually.  This is separate and above those construction projects that include ADA enhancements.

*ADA improvement projects include reconstructing ramps, or installing them if there were none, adding detectable warning panels, rebuilding sidewalks near ramps at slopes that meet accessibility guidelines, and in some cases accessible pedestrian signals (APS) are added.  These projects have included upgrading accessibility in areas near schools, or heavily-used intersections.  In addition to the special ADA projects, all street reconstruction projects and mill/overlay street rehabilitation projects include bringing accessible ramps within the project limits into compliance

*Since 2013, the City tracks the square feet of detectable warning panels installed annually.  These panels are the domed, colored panels (usually yellow) that are installed on the ramps.

*The City also scheduled upgrades when necessary to City parking lots and downtown parking spaces to maintain compliance.  When new developments include street construction, ADA ramps are included with those projects.  These upgrades are paid for by developers.  When the State DOT reconstructs a state highway within the City, they also include ADA upgrades within the project limits.

*In 2008, ADA upgrades were made to Dinosaur Park.

*Other improvements by the Parks and Recreation Department include the ADA-accessible playground at Legacy Commons, elevators in the Roosevelt Ice Arena and Roosevelt Swim Center.  There are four zero-depth pools in the City and these pools include chair lifts.  There is additional ADA parking at the Swim Center.

*Rapid City Regional Airport (RAP) underwent a $20 million renovation in 2012 expanding and updating the terminal facility.  Part of that renovation included all new ADA restrooms and the addition of three jet bridges for easier access to aircraft.  All seven gates at Regional Airport now have jet bridge loading ability.  Regional Airport also employs part-time Skycaps for ADA assistance from curbside to plane and back.  In 2016, Regional also developed a brand new website that is fully accessible.

*The Rapid City Public Library continues to provide an increasing amount of services for people with disabilities.  The facility expanded in 2002, including the addition of an elevator, and went through further renovation in 2017 to adhere to ADA guidelines with wide aisles for book stacks and furniture placement as well as offering Braille wayfinding signage.

*The Library offers a considerable array of services in an accessible facility.  The Library has a partnership with the South Dakota Braille and Talking Book Library to provide services for visually-impaired customers.  Customers can choose from a large collection of large print books. There are thousands of eBooks where the text size can be adjusted.  Also eAudio books are available for a convenient listening option as are magnifying readers for books and magazines.

*The Library also offers home delivery services for those with permanent or temporary medical challenges that make it impossible or very difficult to come to the library in person.

*In 2019, school administrative offices moved out of the City/School Administration Building at 300 Sixth Street.  City Hall is currently undergoing substantial renovations with a focus on improving accessibility.  The Finance Office now offers an accessible customer service desk for the general public.

Rapid City has undergone numerous changes since the ADA was signed into law in 1990.  Mayor Allender says while the community has come a long way in three decades, it must continue to adapt, evolve and be ready to address issues brought forward by persons with disabilities.