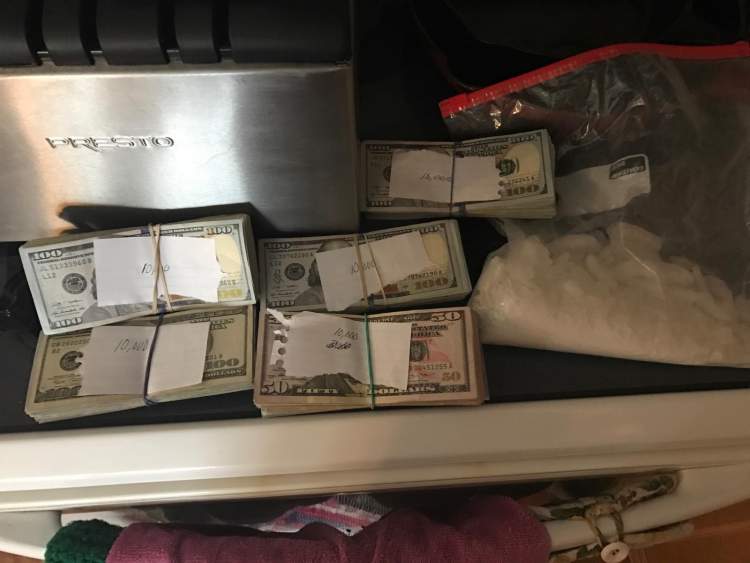 Following a UNET (Unified Narcotics Enforcement Team) investigation into ongoing suspected drug activity at a Rapid City residence, a search warrant was requested and granted for the residence at 840 N. Spruce Street #122.

The search warrant was executed in the afternoon hours of March 31, 2017. The search of the residence turned up numerous pieces of drug paraphernalia, marijuana, cocaine, and nearly 1.5 pounds of methamphetamine. Additionally, around $70,000 cash was recovered from the residence.

The owner of the residence, 54-year-old Linda Pastian of Rapid City, was placed under arrest for Distribution of a Controlled Substance.

***Find attached two photos of methamphetamine and cash recovered from the residence.

“This is a substantial amount of drugs that we’ve now been able to keep from reaching the hands of citizens in our community,” says Sgt. Cathy Bock, supervisor of the UNET. “This investigation was, in-part, a result from tips from the public. We’re working every day to curb the methamphetamine epidemic in our community, and we consistently rely on concerned citizens to let us know where we should be focusing our attention.”

Anybody wishing to report suspicious activity in their neighborhood may do so at any time by utilizing the RCPD’s anonymous tip service, Tip 411. A tip may be submitted by texting ‘RCPD’ and the information to 847411.

The UNET’s primary responsibility is the investigation of all drug-related offenses in the area. Local agency members of the UNET are all sworn Special Assistants to the South Dakota Attorney General and have statewide jurisdiction. The team works in the Pennington, Fall River, Custer, and Meade County areas.

The RCPD is one of several agencies that make up the UNET, which is operated as part of the South Dakota Division of Criminal Investigation. Other Agencies that make up the UNET include the Pennington County Sheriff’s Office, the SD DCI, the Drug Enforcement Administration, Homeland Security Investigations, the Bureau of Alcohol, Tobacco, and Firearms, and the South Dakota National Guard.