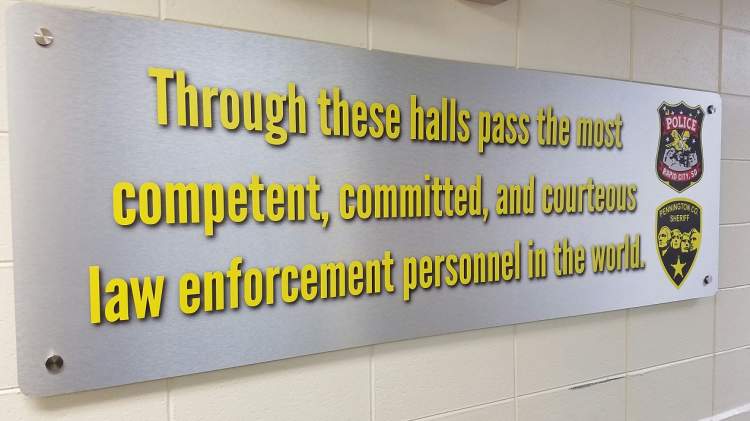 This sign reminds all officers the values they are expected to uphold as they do their job.

Ten new officer-recruits have begun their training with the Rapid City Police Department. The new recruits will be officially sworn in as officers on July 27th at 3:00 p.m. in Judge Davis’ courtroom at the Pennington County Courthouse.

The Summer 2016 recruit class consists of:

In August, the officers will begin an intensive law enforcement certification program at the George S. Mickelson Criminal Justice Center in Pierre.

After graduating from the academy in November 2016, the new officers will be certified to work in law enforcement in South Dakota. The officers will then be required to complete the RCPD’s Police Officer Field Training Program before receiving a permanent shift assignment for the remainder of their 18-month probationary period.

“It’s important to note that these individuals will be sworn in as police officers just weeks after the targeted attacks on law enforcement in Dallas, Texas and Baton Rouge, Louisiana,” said RCPD Chief of Police Karl Jegeris. “I am thankful that these events have not caused these individuals to lose sight of their commitment to serving those in need. I wish these ten officers the best as they continue toward their goal of becoming guardians of our great community.”