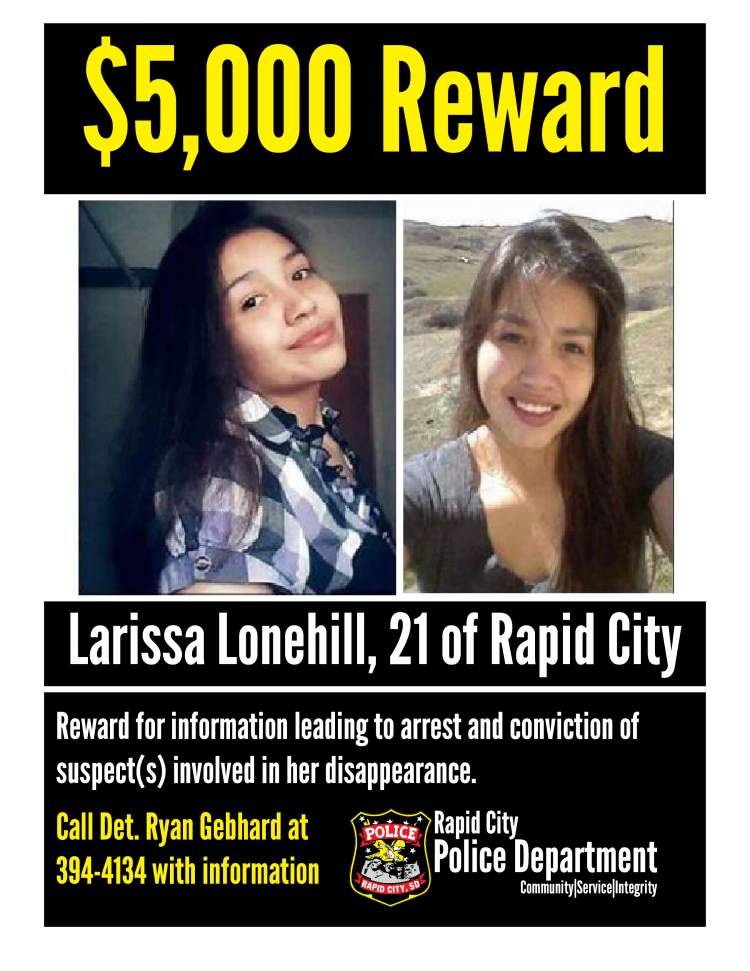 The Rapid City Police Department has secured approval from the Community Reward Fund to offer a $5,000 reward for information leading to the arrest and conviction of any suspect(s) involved in the disappearance of 21-year-old Larissa Lonehill.

The RCPD began investigating Lonehill’s disappearance in early November of 2016. She was last seen in Rapid City in October.

Information gathered in the active, ongoing investigation has led detectives to believe Lonehill is deceased. Detectives believe her body may have been disposed of within a 100 mile radius of Rapid City.

“We’ve investigated an enormous number of leads in this case,” says Captain James Johns, commander of the RCPD Criminal Investigations Division. “Now, we need someone to come forward who has knowledge of her disappearance. Larissa has a two-year-old daughter and a number of family members who are in desperate need of closure about their loved-one.”

Specific details on the circumstances surrounding Lonehill’s disappearance are being purposefully withheld from becoming public in order to preserve the integrity of the investigation.

“We know news of this investigation and reward is going to spread quickly,” said Captain Johns. “And you can bet that the person, or persons responsible are going to be paying attention. We don’t want them knowing what specific information we possess in relation to Larissa’s disappearance. The priority right now is generating information that will help locate Larissa. If news of this reward leads to an arrest, we’ll be in a position to offer more information.”

Anyone with any information about the disappearance of Larissa Lonehill is encouraged to contact Detective Ryan Gebhard at 394-4134.

The Community Reward Fund is a 501(C)(3) public charity that was incorporated in 1994. It is used to administer the distribution of funds donated by the community. The CRF is administered by a seven-member panel which delegates when money from the fund is to be offered in order to facilitate the resolution of serious crimes.