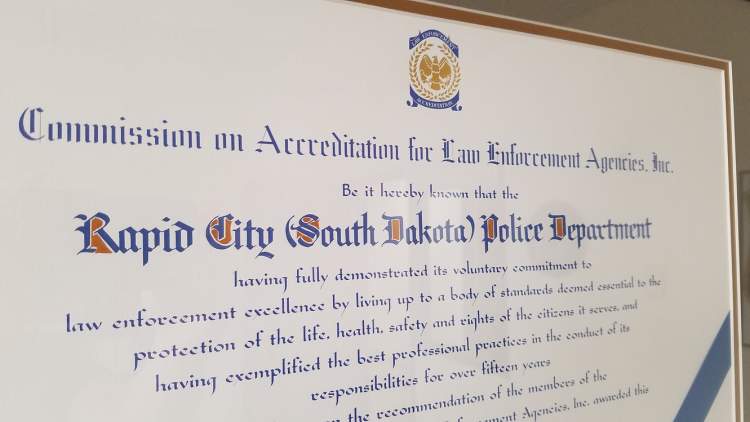 For the ninth consecutive time since 1990, the Rapid City Police Department has been awarded accreditation by the Commission on Accreditation for Law Enforcement Agencies (CALEA).

In March, a team of CALEA assessors visited the department for an on-site assessment, verifying that the RCPD complies with 484 state-of-the-art standards covering four basic areas:  policy and procedure, administration, operations and support services.

The team of on-site assessors reported their recommendations to the Commission, which made the final determination on accreditation at an awards conference on July 30th. The RCPD was again found to be in compliance with all standards, and awarded Meritorious Advanced Accreditation with Excellence. Only a small percentage of accredited agencies reach this status. Accredited status is granted for a four-year period, during which time the agency must submit annual reports attesting to continued compliance with the Commission’s standards.

The RCPD has been continuously accredited by CALEA since 1990. During the re-accreditation cycle in 2010, the RCPD was designated as a CALEA Flagship Agency, an award that recognizes law enforcement agencies for demonstrating continued success in the accreditation process.

“Few other professions require the integrity and accountability that is demanded of a police officer,” said Chief of Police Karl Jegeris. “Now, it’s more important than ever before to operate at the highest level of professional standards. Being a CALEA Flagship Agency means that the citizens of Rapid City can count on the greatest degree of professional service from our officers and our staff. I’m extremely proud to oversee an agency made up of such dedicated men and women willing to serve and protect their community.”