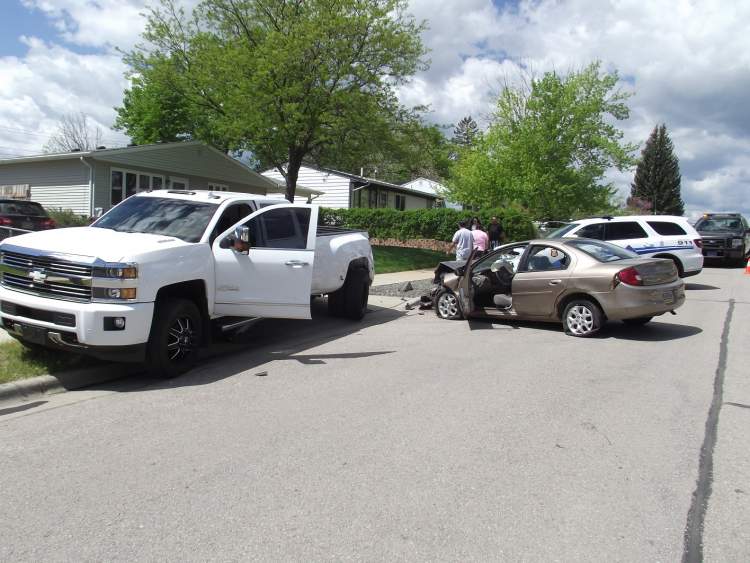 26-year-old Kayla Lamont has been arrested on a multitude of charges after crashing into multiple vehicles on Rapid City’s north side.

At around 10:40 a.m. on May 25th, police were called to the 300 block of N. Racine Street for a report of a Dodge Neon that had left the road and struck a traffic sign. The vehicle then turned left to head westbound on Van Buren Street before striking a pickup truck.

Following the collision, Lamont exited the Neon and got into a confrontation with the driver of the pickup she had just struck. She then re-entered her vehicle, put it in reverse, and struck an SUV while attempting to back up. She then put the car in drive before striking a third vehicle.

At this point, police located Lamont’s vehicle and attempted a traffic stop on it. Lamont did not stop, and accelerated away, westbound on Van Buren. She lost control of her vehicle before striking another pickup truck.

Responding officers were able to apprehend Lamont before she could cause further damage. A syringe, which field-tested positive for methamphetamine, was located on her person. She was ultimately placed under arrest for DUI, Reckless Driving, Aggravated Eluding, three counts of Accident Hit & Run, Possession of a Controlled Substance, and No Proof of Insurance.

“Lamont was highly intoxicated when police made contact with her,” says Lt. Eli Diaz, Sector Lieutenant for Rapid City’s North Sector. “By getting behind the wheel of her vehicle, she put everyone else’s safety in danger. We at the RCPD are extremely thankful her destructive actions did not seriously hurt or kill anyone today.”

*** The charges are merely accusations and the arrested individual is presumed innocent until proven guilty.  Any additional details regarding this case can be obtained from the Pennington County State’s Attorney and/or court records as appropriate.