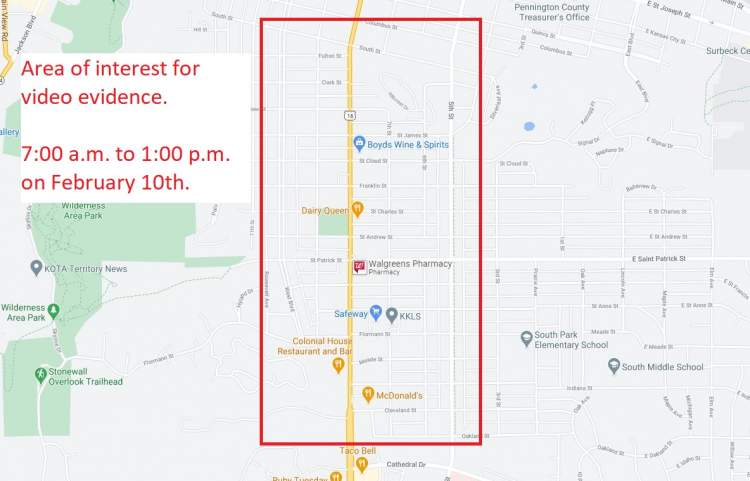 The Rapid City Police Department is currently investigating a homicide following a report of an unattended death at 821 Flormann Street on February 10th.

On February 10th at around 2:35 p.m., police were called to the address for a report of an elderly female with a laceration to her throat. On arrival, police located the female who was obviously deceased inside the residence.

The deceased has been identified as 82-year-old Reta McGovern of Rapid City.

An autopsy has since been conducted. Determinations made in the autopsy have transitioned the case into a homicide investigation.

Police are currently working to identify the suspect. It is believed the murder occurred in the morning hours of February 10th.

Police are now seeking the public’s assistance in locating any video evidence that would show the suspect in the area in the hours before or after the homicide. The Rapid City Police Department is especially interested in any video that would show anyone on foot in neighborhoods that exist between West Boulevard and 5th Street between the hours of 7:00 a.m. and 1:00 p.m. on February 10th.

Anyone with any information or video that may aid police in the investigation should contact Det. Barry Young at 605-394-4134. An anonymous tip can also be submitted by texting the letters ‘RCPD’ and the information to 847411.

The investigation into this homicide is being conducted jointly between the RCPD, the Pennington County Sheriff’s Office, and the South Dakota Division of Criminal Investigation.