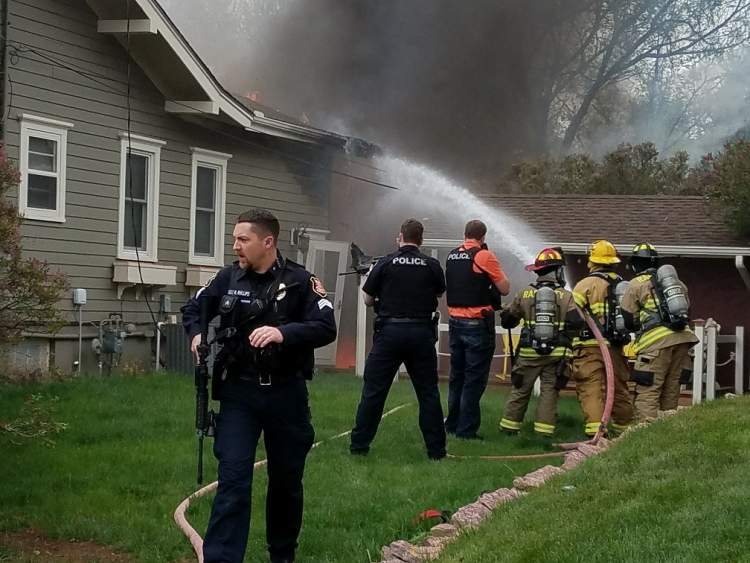 A call for service of a suicidal subject transformed into a structure fire requiring the response of dozens of law enforcement and fire personnel.

Minutes before 1:00 p.m., the RCPD responded to the 1700 block of 11th Street for a report of a suicidal individual. On arrival, police made contact with the reporting party who indicated the suicidal individual had entered a nearby recreational vehicle with a gas canister. The subject was also reported as potentially armed.

Shortly after arrival, responding officers observed that the camper had caught fire. Because of the large amount of fire coming from the camper, nearby structures were evacuated.

Fire crews from the Rapid City Fire Department arrived and began working to extinguish the fire. Due to the safety threat presented by the potentially armed, suicidal individual, fire personnel began attacking the fire from defensive positions under the scene security provided by responding law enforcement units. Ammunition stored in the trailer could be heard exploding as it burned in the fire.

This incident remains an open, active, and ongoing law enforcement investigation. Law enforcement units from the South Dakota Highway Patrol also assisted in the response to the incident.

The RCPD would like to join our fellow responding public safety agencies in thanking the surrounding neighborhood for their understanding and cooperation as we all worked to protect the safety of the area. The work of members of the media was also appreciated as we worked to get information out to the public regarding this public safety incident.