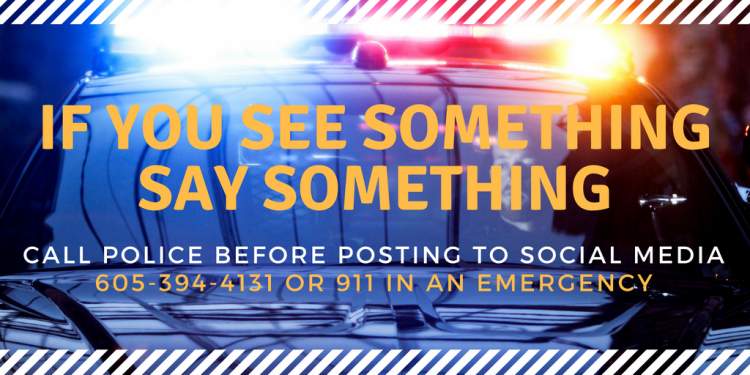 Over the last several days, the RCPD has been contacted numerous times regarding recent social media postings about suspicious activity related to kidnapping, abductions, and even speculation about organized human trafficking at several different retail locations across Rapid City.

In investigating the situation, the RCPD has determined these recent reports are unsubstantiated. At this point, there is no reason to believe that any such kidnapping, organized human trafficking, or other abduction activity is taking place in Rapid City.

It’s worth noting that this situation highlights a very important issue in the realm of criminal investigation. If a person feels they may have been a victim or target of a crime, rather than simply posting about it on social media, they should call the police and report it first.

“Posting a narrative of criminal activity without getting law enforcement involved creates a dangerous situation in which rumor often eclipses fact,” says RCPD Chief of Police Karl Jegeris. “The RCPD wants to ensure Rapid City is the safest community it can be, but can only do so with the help and timely information reported from the community.”

Anyone wishing to report suspicious activity should not hesitate to contact the Rapid City Police Department 24/7 using our non-emergency dispatch number at 605-394-4131. If they are in an emergency situation, they should dial 911.

Tweet
More in this category: « $10,000 reward offered in Rapid City gun store burglary case Suspects in custody in relation to the August 22nd burglary at 1441 W. Main Street »
back to top