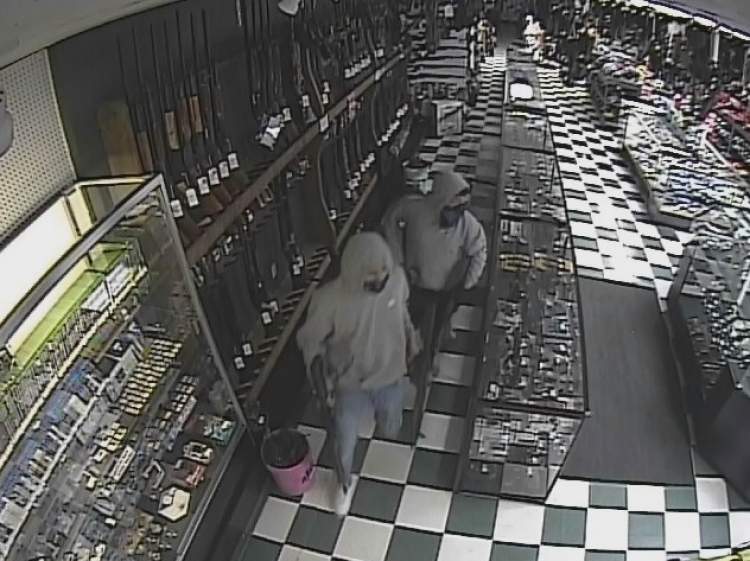 The Rapid City Police Department is currently investigating multiple early-morning burglaries. At the time of this release, one suspect has been taken into custody.

At around 3:55 a.m. on April 19th, police were dispatched to 643 North Lacrosse Street for an alarm. On arrival, police observed that one of the business’s windows had been broken. Upon review of the business’s security footage, a suspect is seen breaking the window with a rock and rummaging through the interior.

At around 4:45 a.m., police responded to 406 E. North Street for a report of an alarm. On arrival, police located a window that had been shattered with a rock. On further investigation, it was determined that two suspects made entry into the business, and took multiple AR-15-style rifles before fleeing the scene.

At around 5:57 a.m., police responded to 2139 Jackson Boulevard for a report of a burglary. On arrival, police located a broken window, and cleared the building to ensure no one was still inside. The security footage shows a male suspect throwing a rock through one of the business’s windows. He entered the business and began searching a register for cash before fleeing the building on foot.

At around 6:24 a.m. on April 19th, police responded to 3483 Sturgis Road for a report of a burglary. Police were informed that a suspect was still inside the business.  On arrival, police could hear a crashing noise coming from inside. Police looked inside and observed a male suspect. He was ordered out of the business, but refused to comply with commands. He had made his way to a ledge inside the business and was attempting to break through a window near the ceiling with a crow bar. Police discharged rounds from the less-lethal beanbag shotgun at the suspect, causing him to drop the crowbar. The suspect was able to crawl through an air duct into another room. After spraying him with pepper spray and further physical resistance from the suspect, police were able to get him into custody. He was identified as 21-year-old Garrett Keegan of Rapid City.

Keegan was transported to the RCPD’s Criminal Investigations Division to speak with detectives. Following his interview with detectives, he has been determined to be the suspect also responsible for the earlier burglaries of 643 North Lacrosse Street and 2139 Jackson Boulevard.

Keegan was placed under arrest for three counts of 3rd Degree Burglary, Felony Vandalism, Obstruction, Resisting Arrest, Possession of Burglary Tools, and a Probation Hold before being transported to the Pennington County Jail.

Police are continuing to investigate the firearms taken during the burglary of 406 E. North Street. Find attached photos of the suspects involved. They are described as younger, possibly juvenile males, each standing about 5’7” to 6’1” tall, average build wearing lights grey hoodies, jeans, and bandannas over their faces.

Anyone with any information about this burglary, or the identity of the suspects involved should contact Det. Chris Holbrook at 394-4134. An anonymous tip can also be sent by texting the letters ‘RCPD’ and the information to 847411.