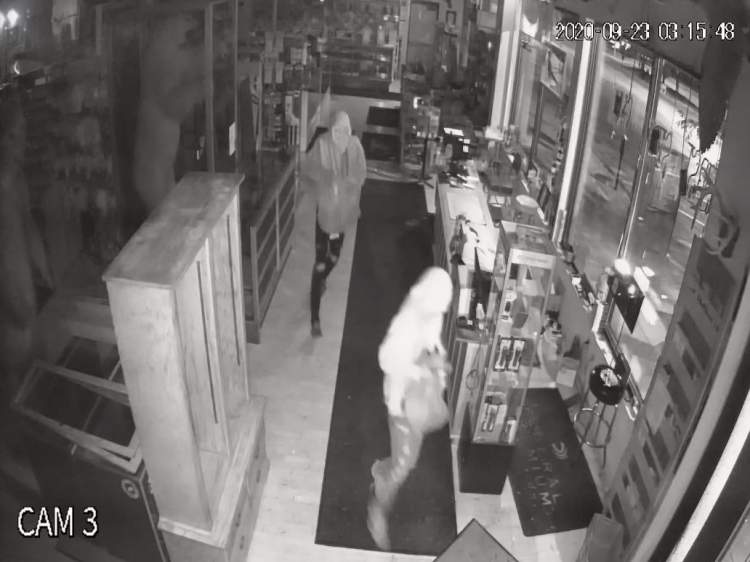 Rapid City police are currently investigating an early-morning burglary to a Rapid City gun shop that resulted in the theft of approximately 40 guns.

At around 3:25 a.m. on September 23rd, police were dispatched to 701 Main Street for a report of an alarm. On arrival, officers observed that a glass door on the shop’s main entrance had been shattered. Officers made entry to the building and located no one inside.

A review of the shop’s surveillance video shows three suspects involved. Two suspects were seen entering the store, one armed with a baseball bat. The suspect with the baseball bat shattered various glass display cases, while the other suspect grabbed handguns from the cases and placed them into a duffel bag. At one point, one of the suspects cut their hand/arm on the glass from one of the displays. The third suspect was seen outside and leaves with the other two suspects as they fled the scene.

Both suspects that entered the store appear to be slim-build males, aged approximately 15 to early 20s, wearing light-colored hooded sweatshirts and masks. Both are wearing pants with distinctive holes in them.

Police are working with the business in order to determine the specific number of firearms taken during the burglary. This remains an open and active investigation.

“Any time you have a large-scale gun theft like this, it’s highly concerning for local law enforcement,” says Captain John Olson, Commander of the RCPD’s Criminal Investigations Division. “We have around 40 guns that are now unaccounted for in the hands of our criminal element. It’s imperative that we, as a community, take steps to properly secure firearms while they are left unattended.”

Anyone with any information about this burglary or the identity of the suspects involved should contact Detective Jim Ingalls at 394-4134. An anonymous tip can also be submitted by texting the letters ‘RCPD’ and the information to 847411.

Tweet
More in this category: « Police investigate fatal crash as a vehicular homicide Homicide investigation underway after remains located in the Black Hills »
back to top