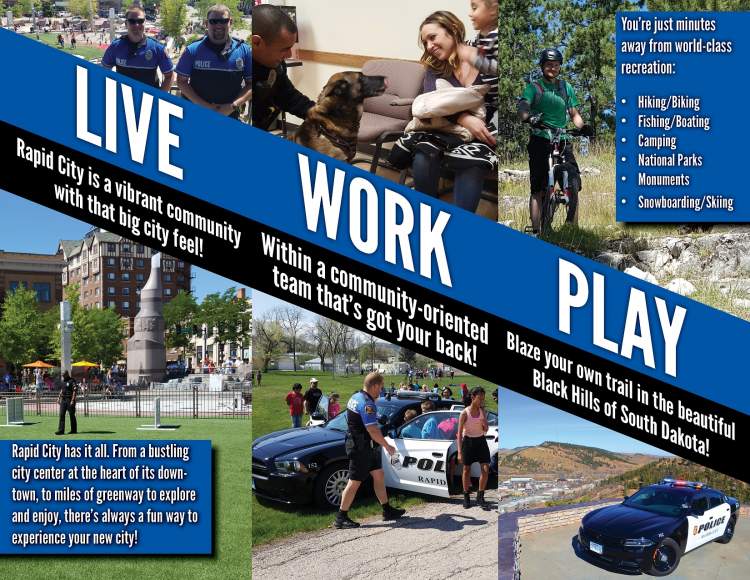 The RCPD is now accepting applications for those interested in becoming a police officer. With recent national events in mind, the Rapid City Police Department is shining the spotlight on the countless number of benefits for applying with our agency:

“I know that the recent violence against police officers around the country may cause hesitation for those who may be on the fence about working in law enforcement,” says Assistant Chief of Police Don Hedrick. “Our agency enjoys a level of community trust found in few other locations in the United States. That’s why we want to market that, and showcase Rapid City as a wonderful place to start a career in police-work.”

Among the qualifications, candidates seeking the position should be highly motivated, physically fit, and well prepared. The RCPD employs a workforce that celebrates the diversity of our community. In that respect, female and minority candidates are also encouraged to apply.

The application is currently live under the ‘Jobs’ tab on at RCGov.org, and the deadline to apply is November 9th. Testing is scheduled for November 16th and 19th at Rapid City’s Central High School. Top candidates from the testing process will receive contingent offers of employment before moving on to the next step. That includes an extensive review of a candidate’s background, psychological exam, and a medical exam.

The Chief of Police will then review each candidate, and give final approval before an official job offer is made. Upon acceptance of that offer, new hires will spend several weeks training in the classroom before attending the 13-week Police Academy in Pierre.