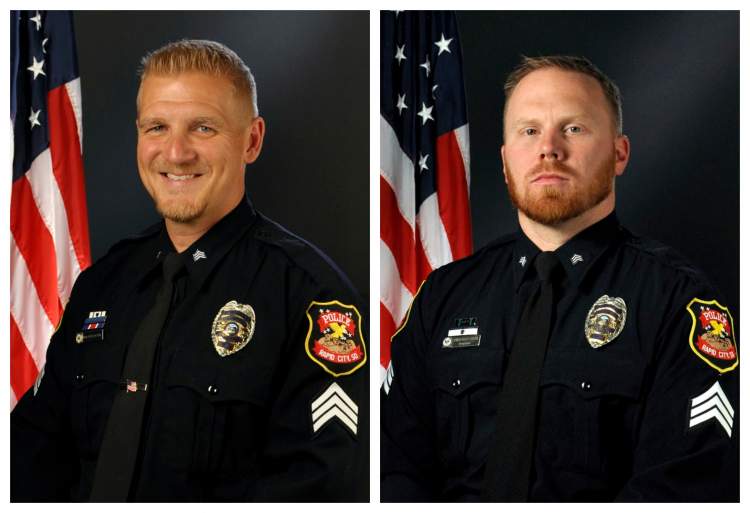 Effective immediately, Tim Doyle and Christian Sigel have been promoted to the rank of Lieutenant for the RCPD.

Lt. Doyle started his career with the RCPD in 2007 after spending several years working as an engineer. He spent several years as an officer in the RCPD’s Patrol Division until he was assigned as a School Liaison Officer in 2010. There, he was assigned to Southwest Middle School and then Central High School. Lt. Doyle was promoted to Sergeant in 2017 and was reassigned as the RCPD’s Juvenile Operations Sergeant in 2019. Lt. Doyle’s ancillary duties include being a member of the Peer Support Team and the Fitness Team.

Lt. Sigel is a graduate of Stevens High School and served as a RCPD Police Cadet prior to becoming an officer at the Newcastle, WY Police Department. He began his career as an officer in the RCPD’s Patrol Division in 2006. In 2014, he was re-assigned as a detective where he spent time serving on the United Narcotics Enforcement Taskforce. Lt. Sigel was promoted to the rank of Sergeant in 2016 where he supervised officers in the Patrol Division. Most recently, he served as the RCPD’s Training Administrator. Lt. Sigel is the Entry Team Leader for the Rapid City/Pennington County Special Response Team, the agency’s lead emergency driving instructor, and serves on the RCPD’s Honor Guard team.

Lt. Doyle and Lt. Sigel will be transitioned to the RCPD’s Patrol Division as Sector Lieutenants where they will each oversee operations in one of the city’s four main sectors.

“Lt. Doyle and Lt. Sigel have had distinguished careers with our agency in which they’ve demonstrated a clear dedication for serving the citizens of Rapid City,” says Interim Chief of Police Don Hedrick. “It’s extremely evident that they will continue to put the community first in every decision they make as members of the RCPD’s Command Team.”

Tweet
More in this category: « Suspect in custody after early-morning crime spree Police investigate homicide on Custer Street »
back to top