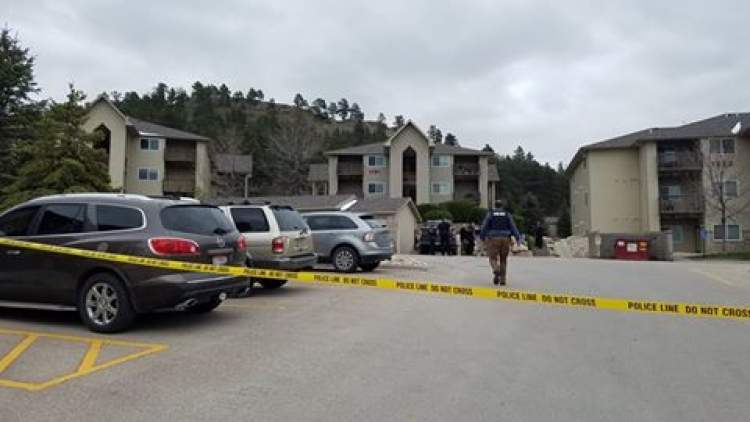 NOTE: This is a press release being sent out by the RCPD on behalf of all of the responding agencies.

At approximately 1:30 p.m. on April 27th, police were called to 1751 Harmony Heights Lane to perform a welfare check on a resident of the apartment complex. When the officer made contact with the resident, the man pointed a pistol at the officer. The officer retreated from the scene and called for backup. Given the dangerous nature of the situation, the Rapid City/Pennington County Special Response Team was called to assist with the resolution of the incident.

The SRT is made up of members from the RCPD, the Rapid City Fire Department, the Pennington County Sheriff’s Office and Pennington County 911 Dispatch. The South Dakota Highway Patrol’s Alpha Team responded to support the SRT operation.

Local law enforcement maintained communication with the man inside the apartment. Throughout the response, the man continued to pose an active safety threat to people in the area by continuing to wave his firearm out of his window and refusing to comply with law enforcement.

The SRT used a specialized armored vehicle known as a Bearcat to approach the apartment in which the resident had barricaded himself. As the SRT entry team made their way toward the apartment utilizing the Bearcat for protection, a member of the response sitting at a vantage point atop the Bearcat observed the man point his firearm at law enforcement officers through a window. This member of the response team fired several shots at the man inside of the apartment. The man died at the scene. His name is being withheld pending notification of his next-of-kin.

“We did our best to remain in constant contact with this individual throughout this incident,” says Captain James Johns, Commander of the SRT. “This individual was well aware that his actions were what controlled the outcome of this event. This is never the resolution we want, but our top priority will always be the safety of the public, and the safety of our first-responders.”

The assisting member of the SRT who fired the shots is a Trooper of the SD Highway Patrol.

The South Dakota Division of Criminal Investigations has been called in to assume control of the ongoing investigation. Any further inquiries about this incident will be referred to their agency.